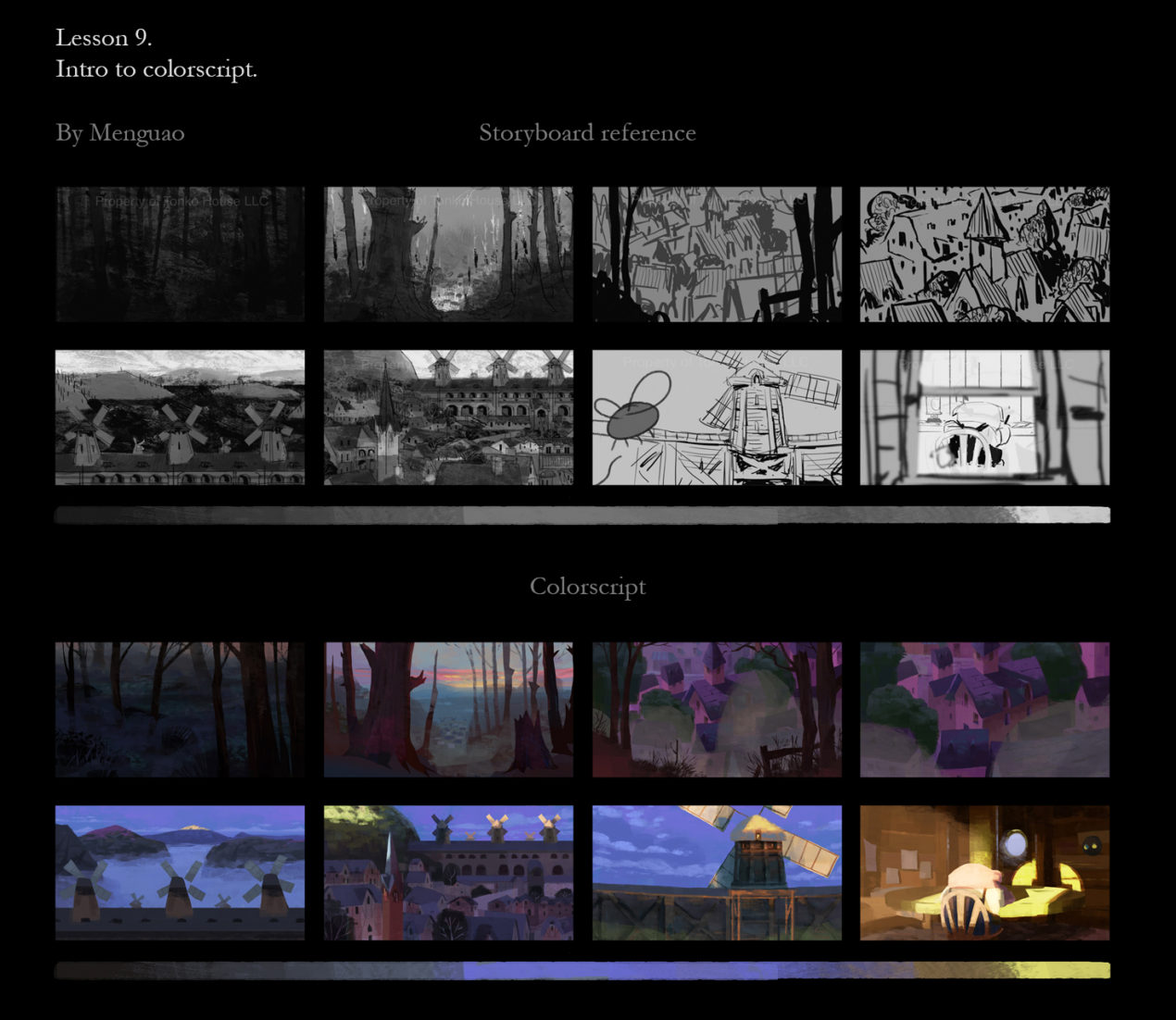 Hi guys, this would be the last post on my path through this amazing schoolism course. It´s week 9 and it´s time to show all the things we´ve learned. This lesson is called introduction to colorscript wich is cool ´cause makes it sound like there would probably be a second part for this course somewhen in the future. Maybe one mainly focused in colorscript? That would be so great… Ey Robert & Dice! Are somewhere listening? A 2nd part for this would be awesoooooooome! Thank you! You never loose nothing for asking, right? 🙂

I finished this course almost 9 months ago and when I did I wrote a good bye letter at the end of it so I´m not gonna repeat myself and say good bye here once again (you can read the letter if you´re interested at the end of the exercise), so I just wanna thank you all for joining me through these weeks and I hope you´ve enjoyed it as much as me.

Ok! Back to work! So this week we were provided with a alternate open sequence of The Dam Keeper and we were asked to choose 3 to 5 frames to convey a lighting idea in sequence. Easy, right? I think this took me more than a week, maybe two and got to the point where I got exhausted. I wanted to do it so well that I spent too much energy and not always in a good way. Sometimes it happens when you are feeling insecure. I´m working on that ´cause in the end that is reflected in the work itself. I always try to enjoy the working process as much as I can since it works both ways: fun and suffering… and any other feeling in fact. That´s the magic about art expression and comunication. The problem is that I use to enjoy the primary work but not so much the end of it so when I look at my artwork I sometimes can see joy in the depth and pain on the surface. So everytime, more and more, I tray to spend less time finishing a drawing and make longer the primary part. In a way what I´m trying to do is to erase the borders between both. And also work faster (yeah, I know you´ve heard me before talking ´bout this jajajaajaa…)

This is the resault of my last exercise (click on the image to enlarge and follow the narrows to continue): 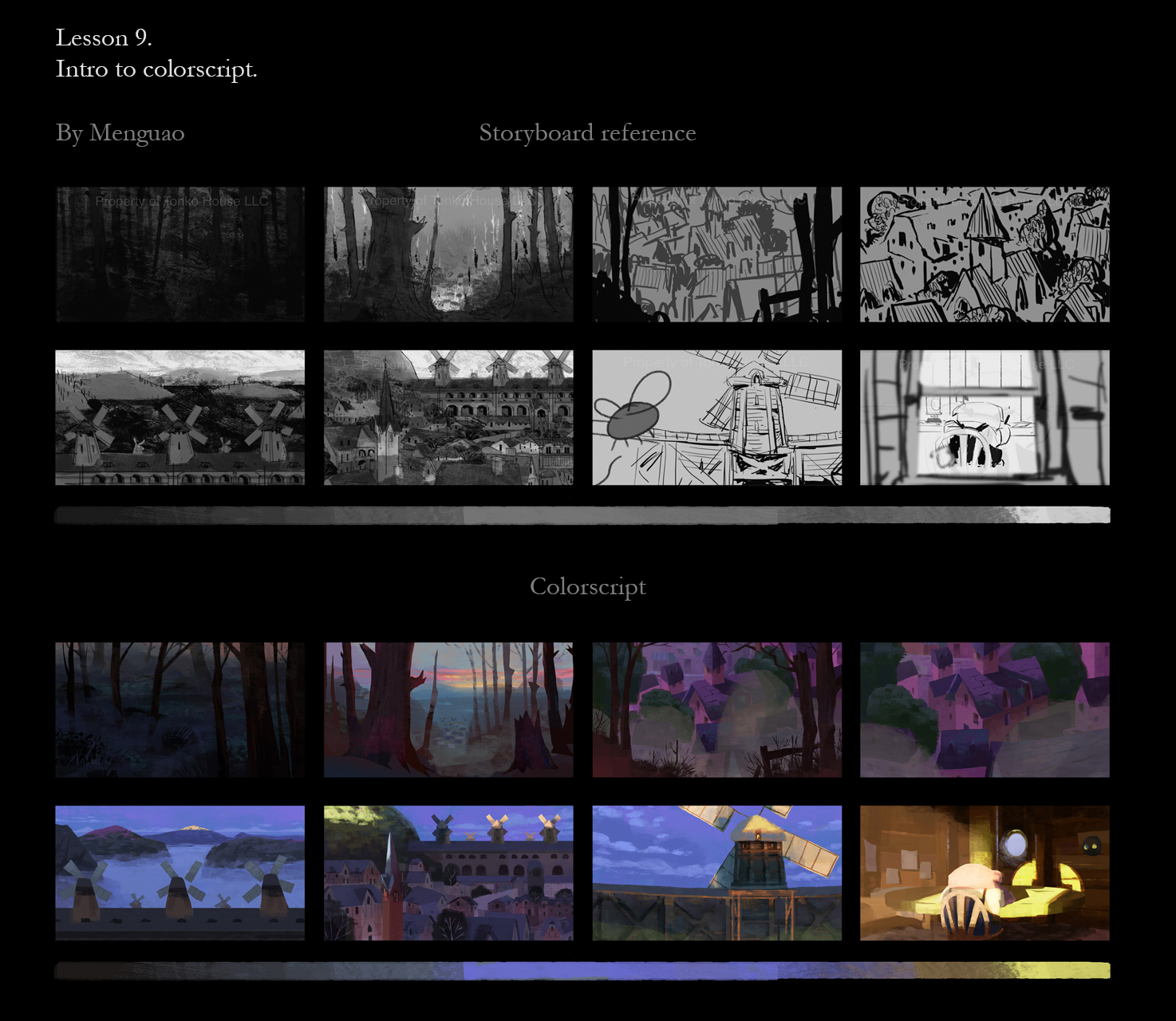 On the first two lines you can see the panels I chose as drawn by Robert Kondo (I think). The next two lines are my paintings and under them you can notice a color stick which represents the evolution of the actions in terms of color. We come from the darkness of the polluted forest and it´s the surise when we arrive to the village where we´re going to meet the hero for the first time, working hard as the sun light of the morning comes in through the window. Basically we´re going to meet the threat/danger: the pollution, the set: the village and the heroe in this sequence. So I wanted to point things out pretty clearly: from dark to light, easy as that.

*On the top of the images there are 5 small pics. The first one shows the previous panel (so this first one has none), the second one is the drawing provided by Tonko House, the last one shows the next panel and the one´s in between are my first sketches (I painted them in a small size). This way I could clearly see where I came from, where I was going and the process in the middle. 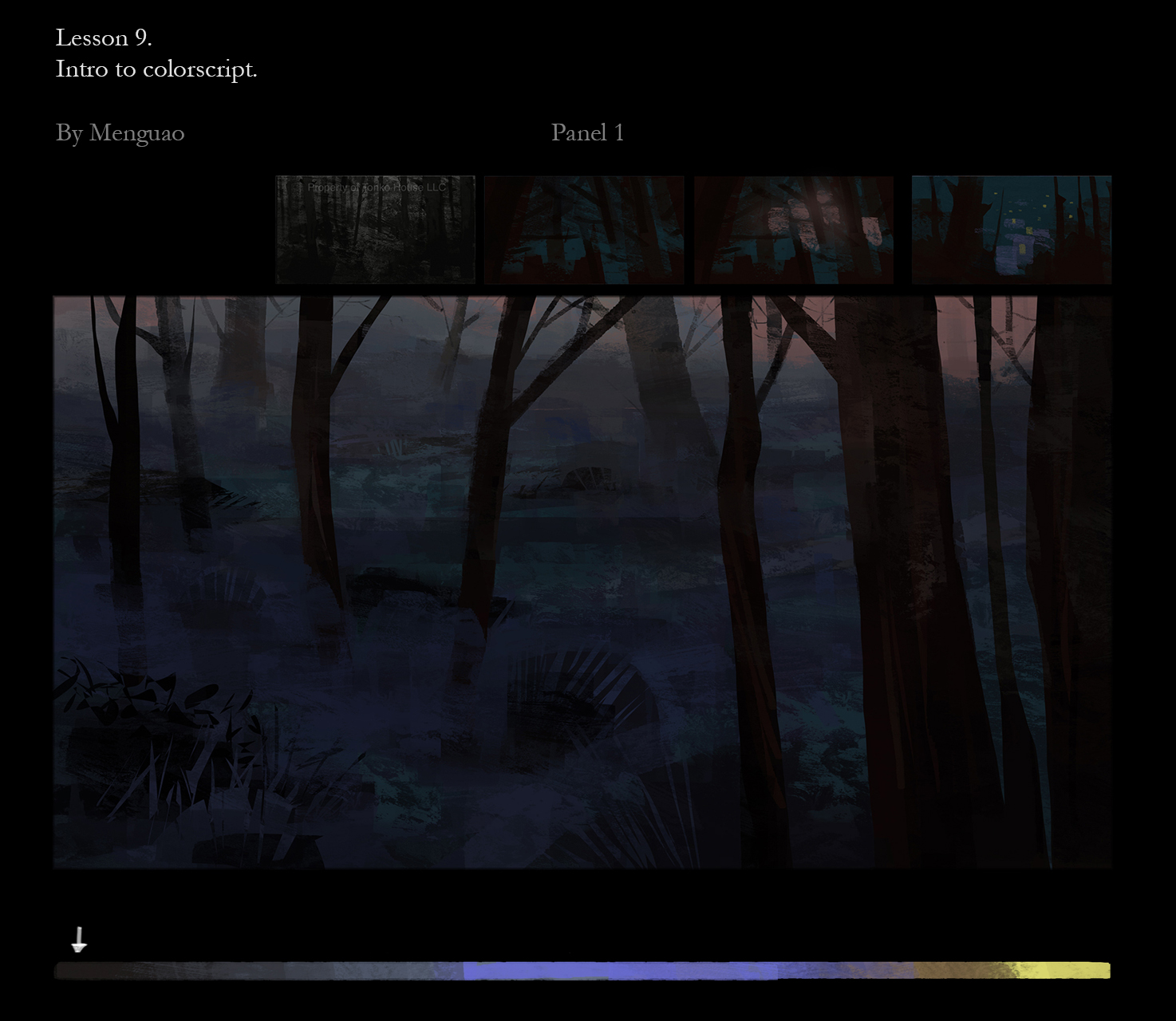 The forest had to be dark but since it´s sunrise time there is some light althoug it is a dirty and dusty one. 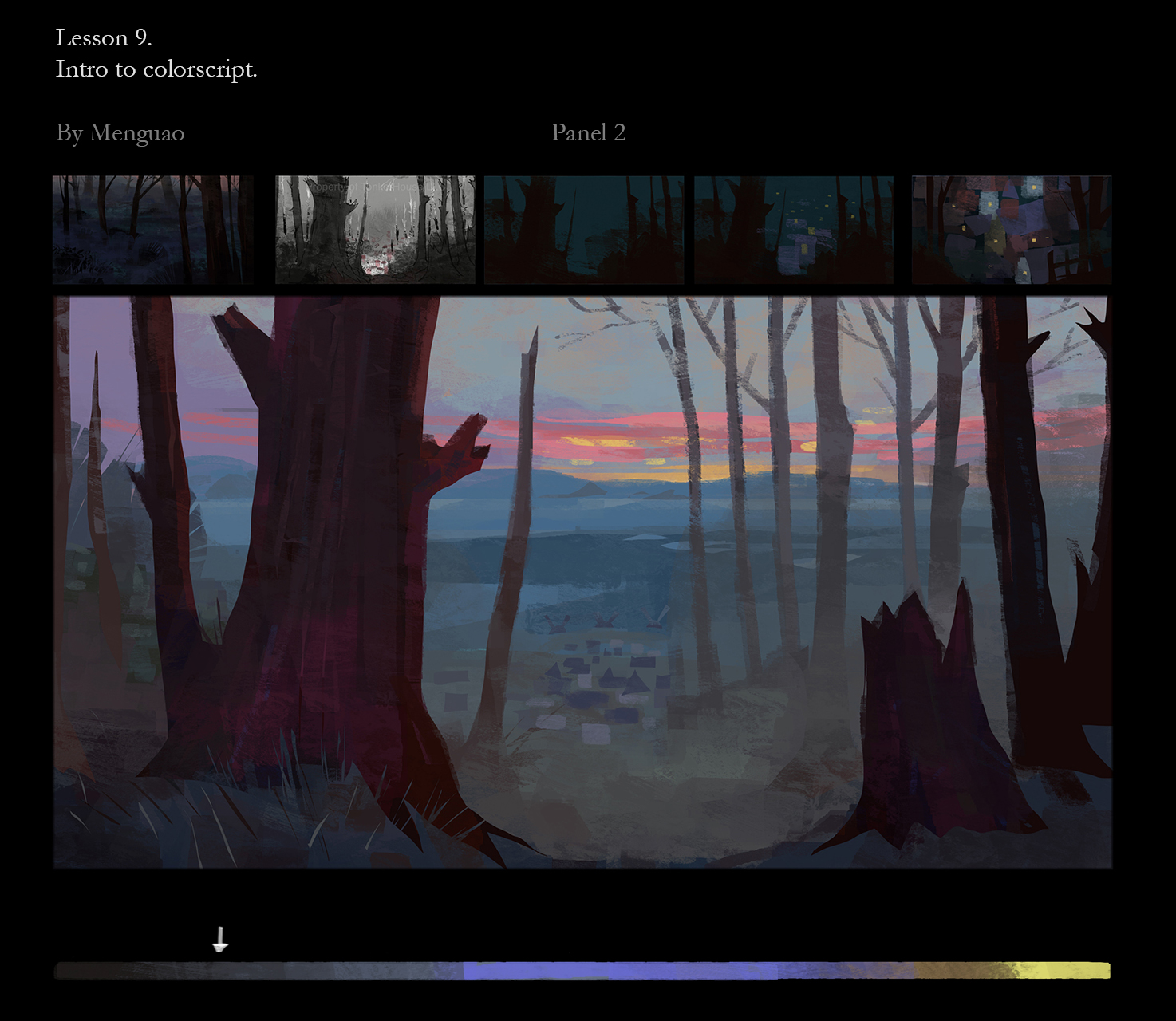 It´s more clear now that we are getting out of the forest and we see at the horizon the light coming out of the mountains. It´s still very polluted ( now I think I could have made it look even more polluted). 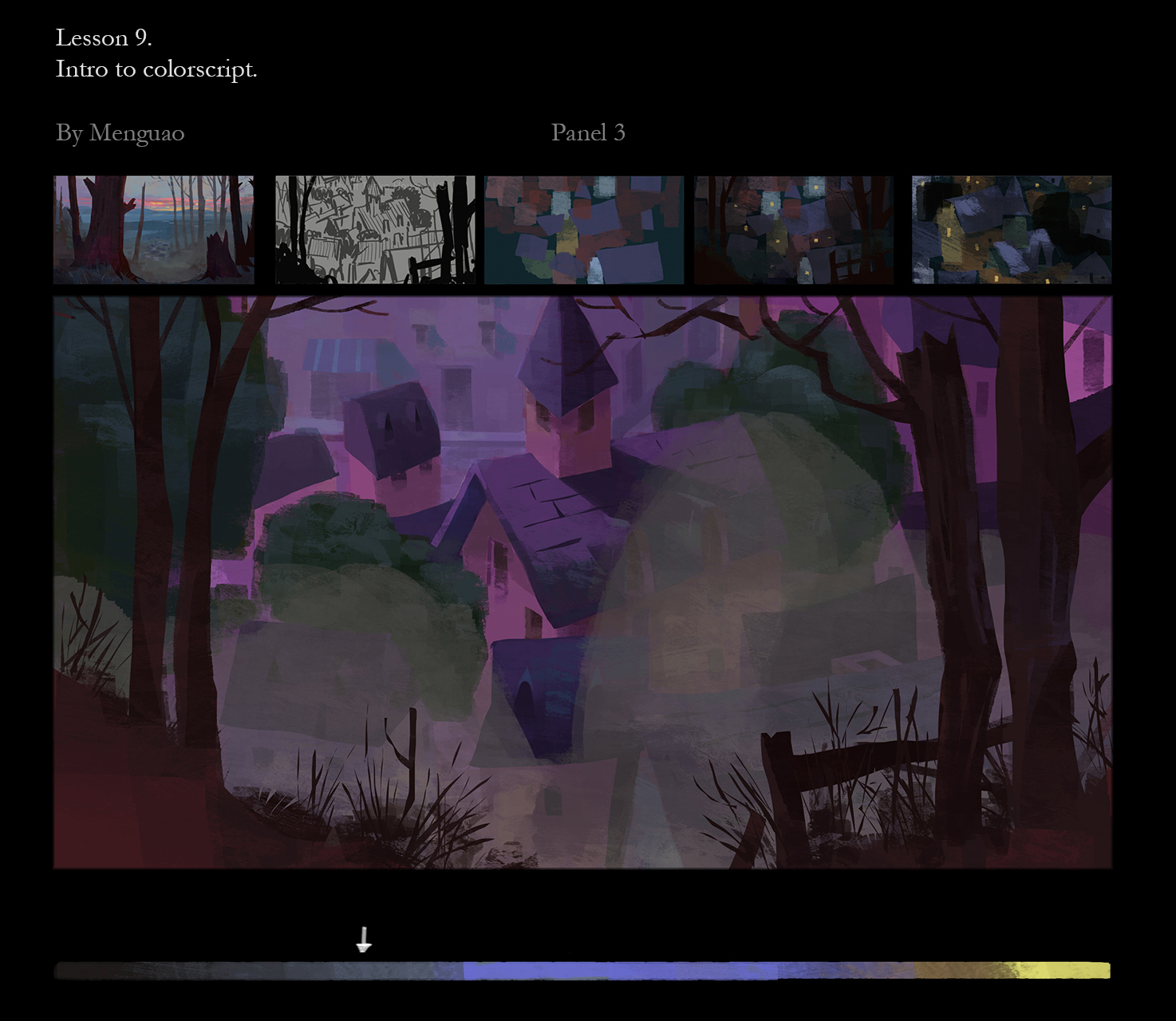 The village. Not polluted but threaten and still in the night time despite of the sunrise. 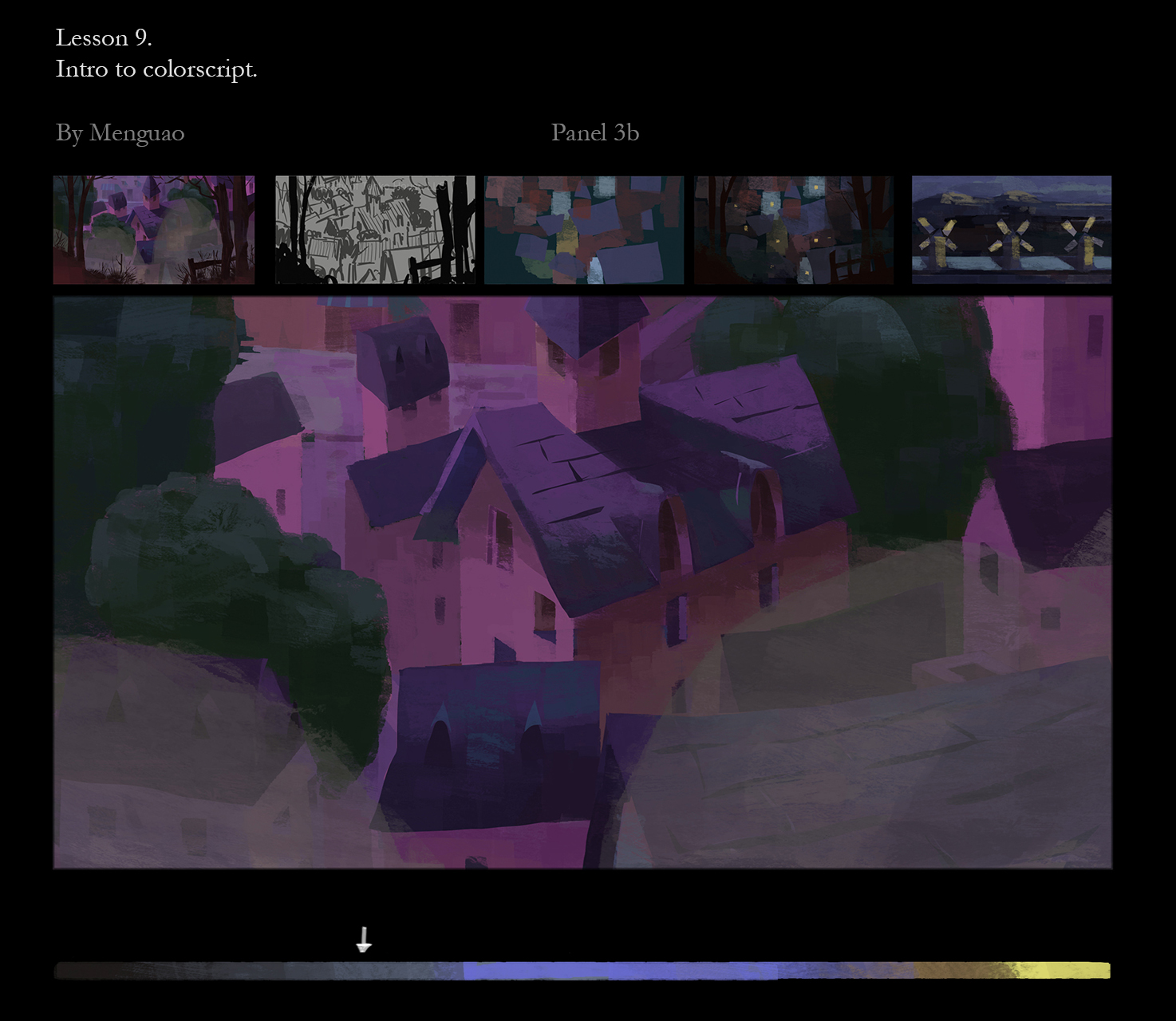 A zoom in through the pollution to the village. 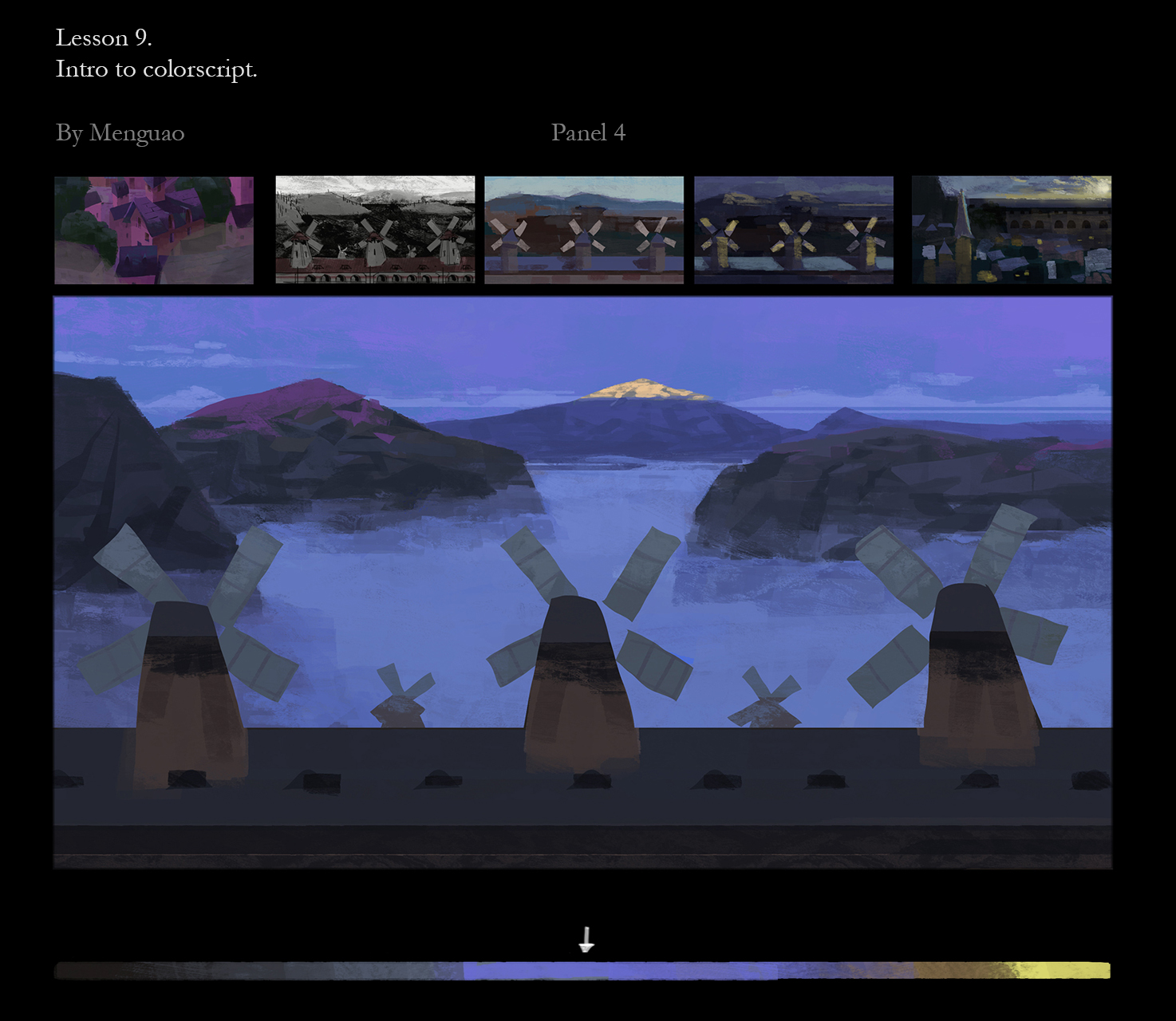 In this panel I had to decide wether to set the sunrise in front of the camera or behind. I chose to set it behind so in the final panel the light could enter through the window of the mill (you can see in the small pics above I changed my mind). Here we see this thing over the ground wich we don´t know if it´s mist or pollution and it´s ok for me to leave it open. 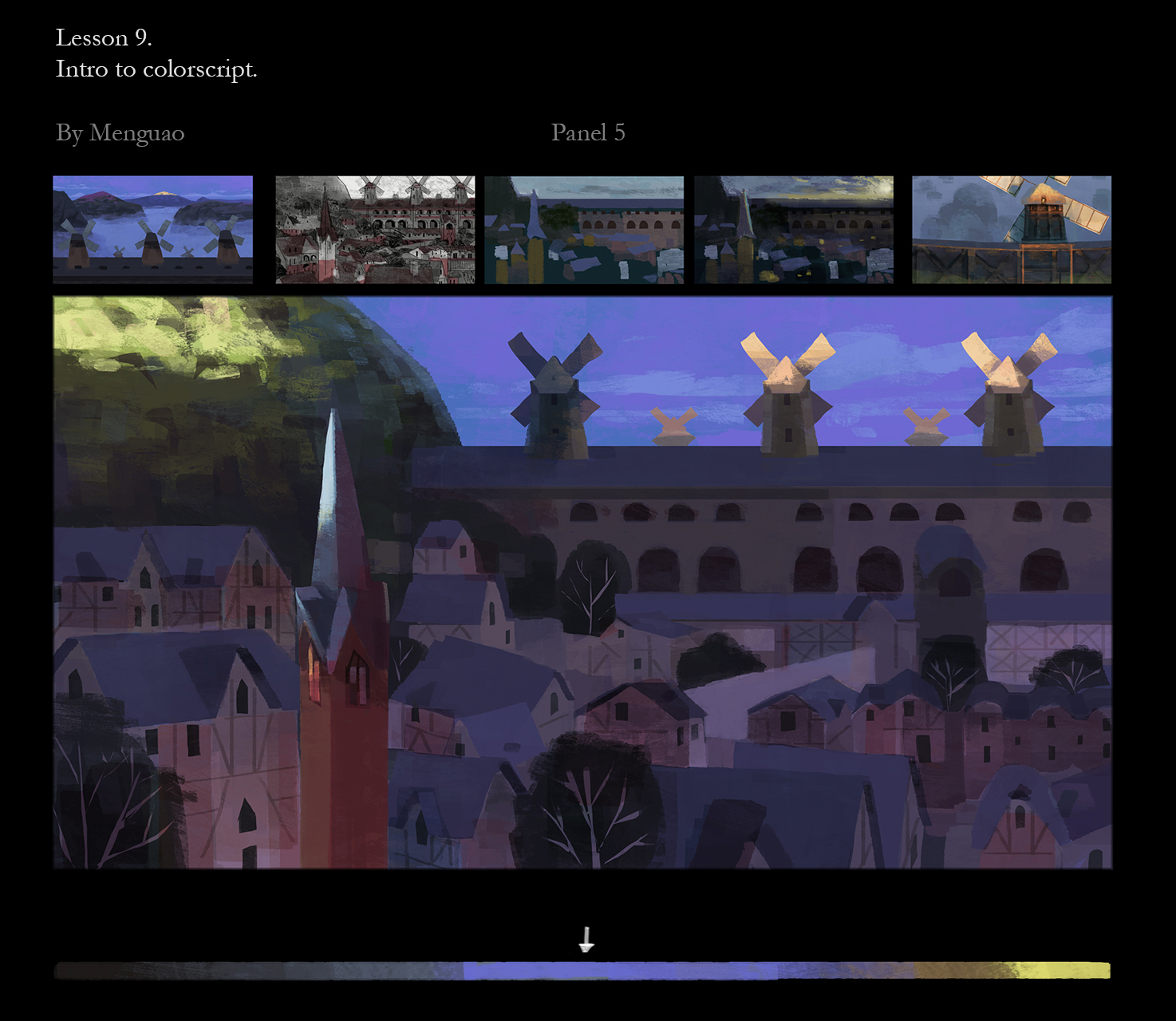 The sun pointing the mills in wich we´re about to meet our hero. Under him the village is still sleeping. 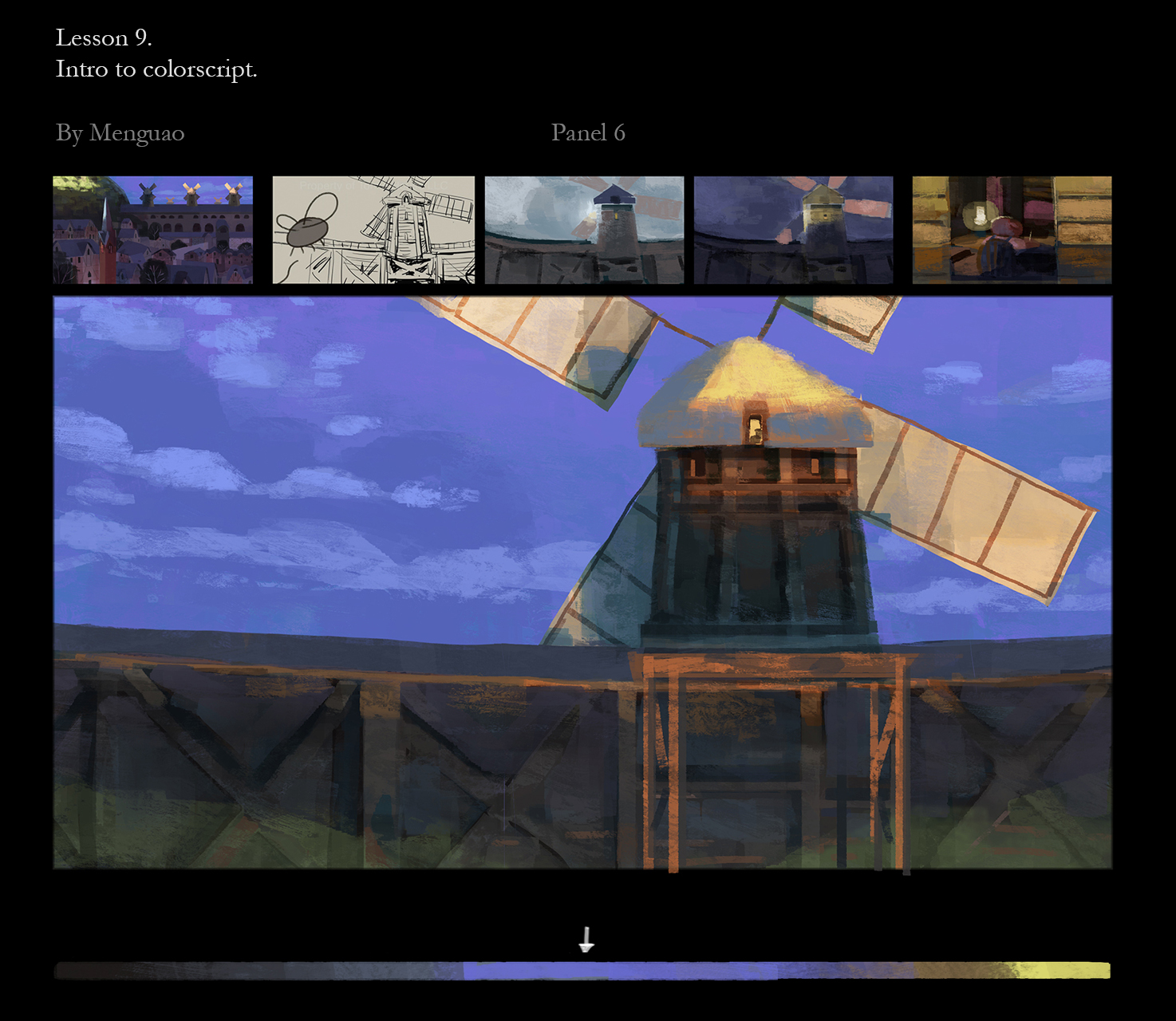 Befor meeting the heroe we´re gonna see his lair presented in an epic way (that´s what the drawing suggests me) and to enforce that idea there´s a warm light coming from the ground. I imagined it in my head as if there were still streetlight. 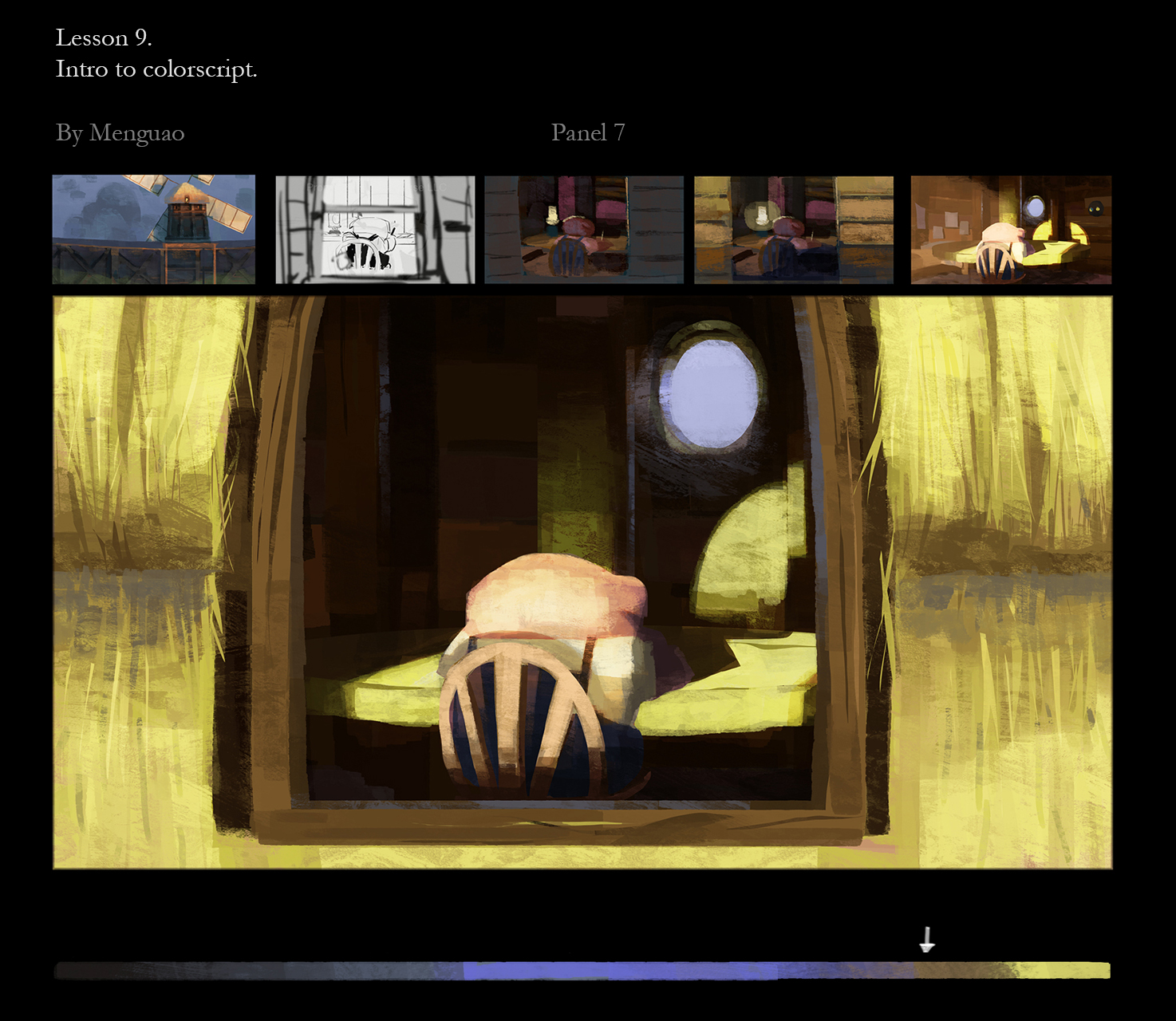 The hero. Working in the dark, out of anyone´s sight. Light hits his back directly and we can´t see the interior except for the bull´s eye. 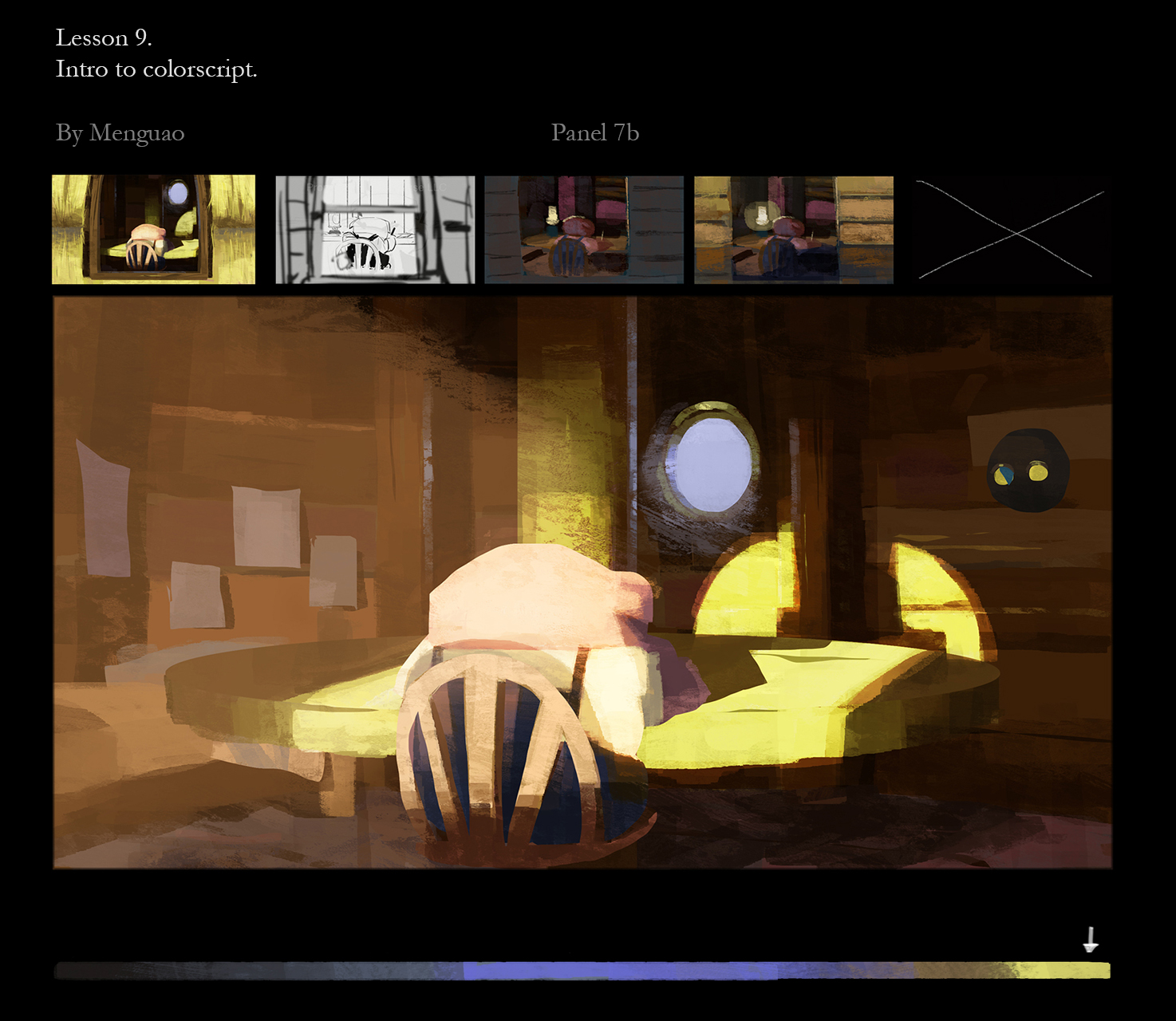 At last we can see the heroe´s back as well as the interior of the place where he is working. Classic dramatic lighting: hopeful and sad at the same time, I think it´s an oppropiate presentation for our hero (although maybe not too original).

And next, my good bye letter. Not much more to say. 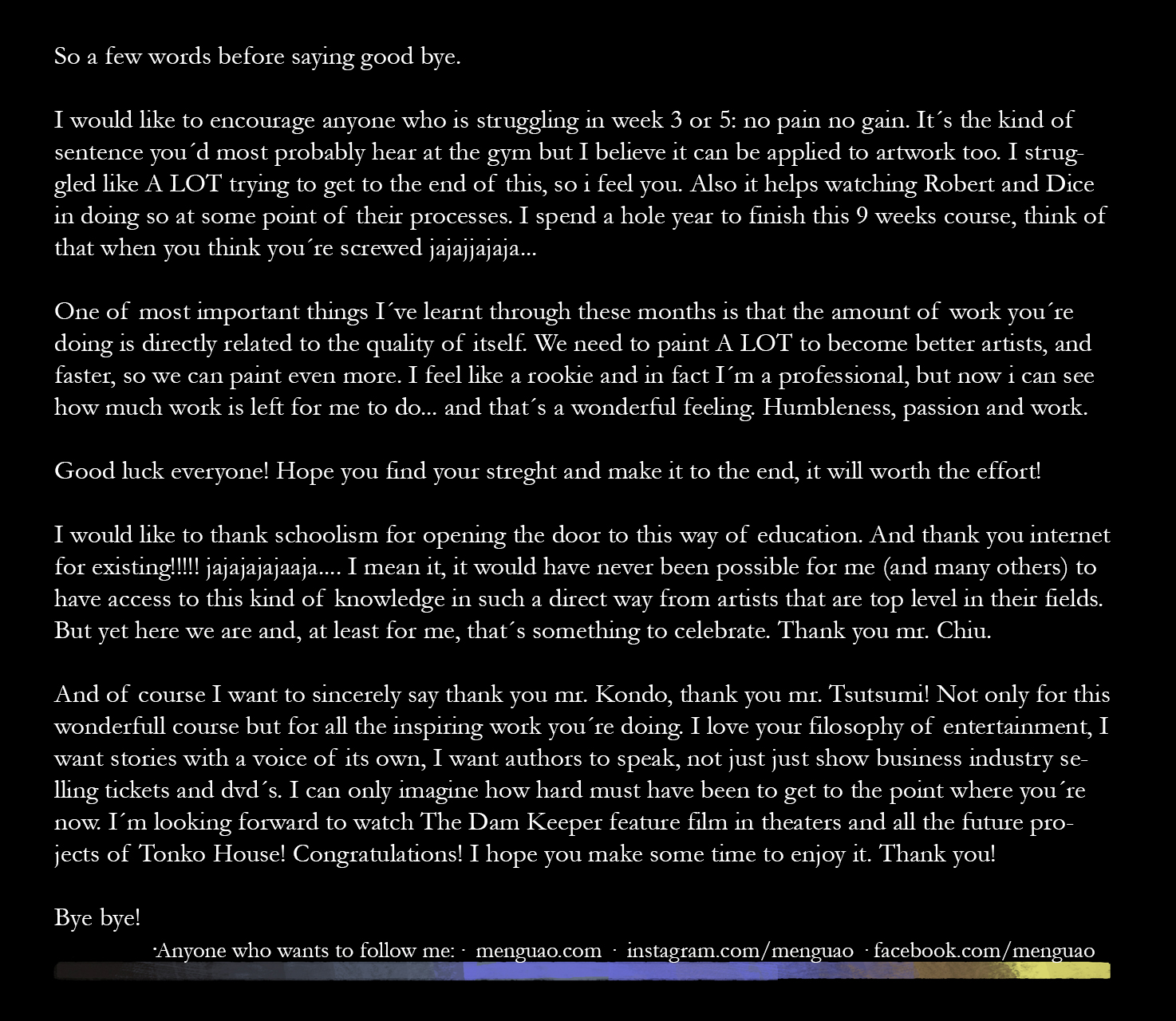 Oh yes, here´s some bonus track! I worked hard during the exercise in trying to make my work as similar as possible as the Tonko House style so here is a tutti-frutti of pics I could find on the internet to have as reference: 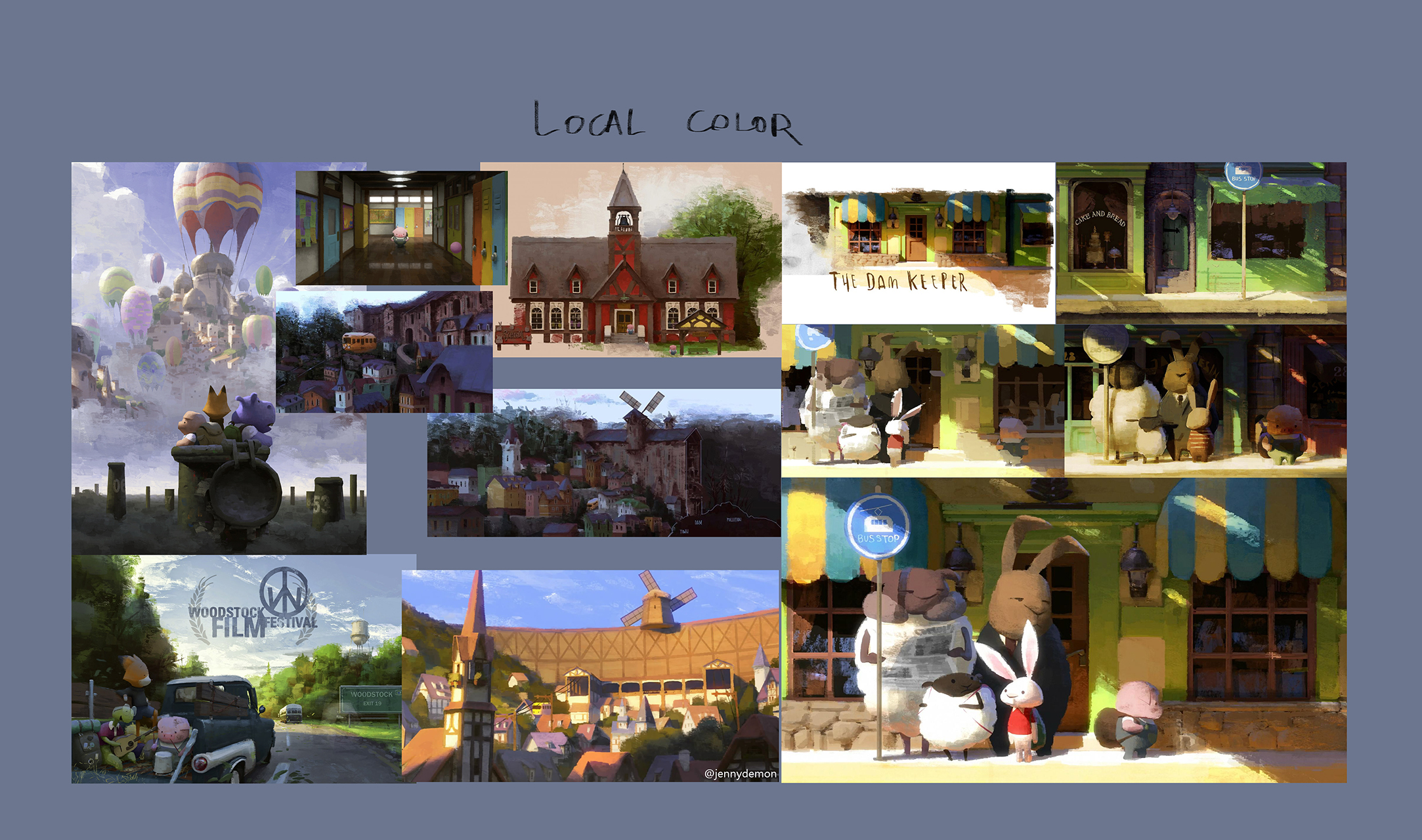 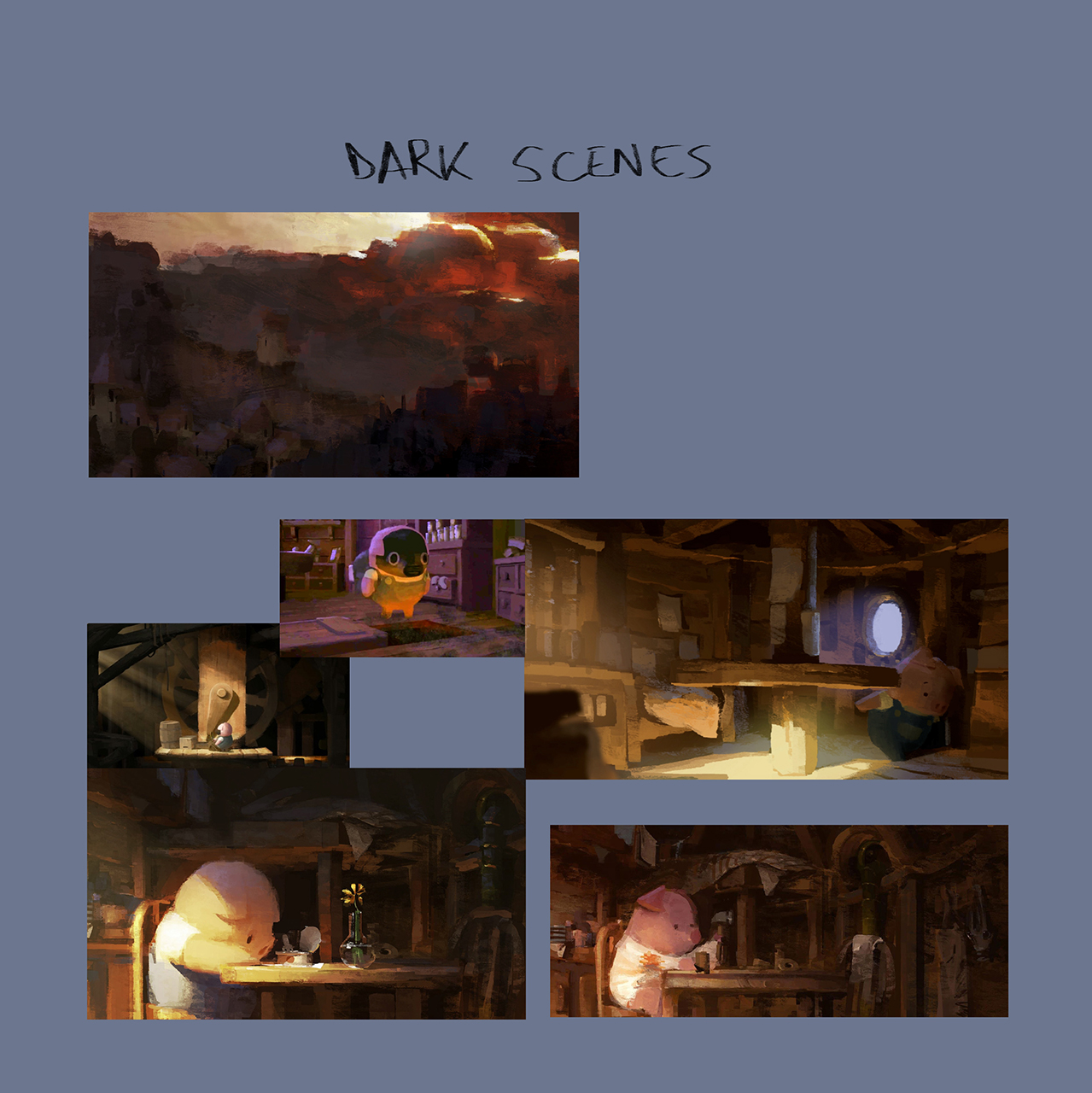 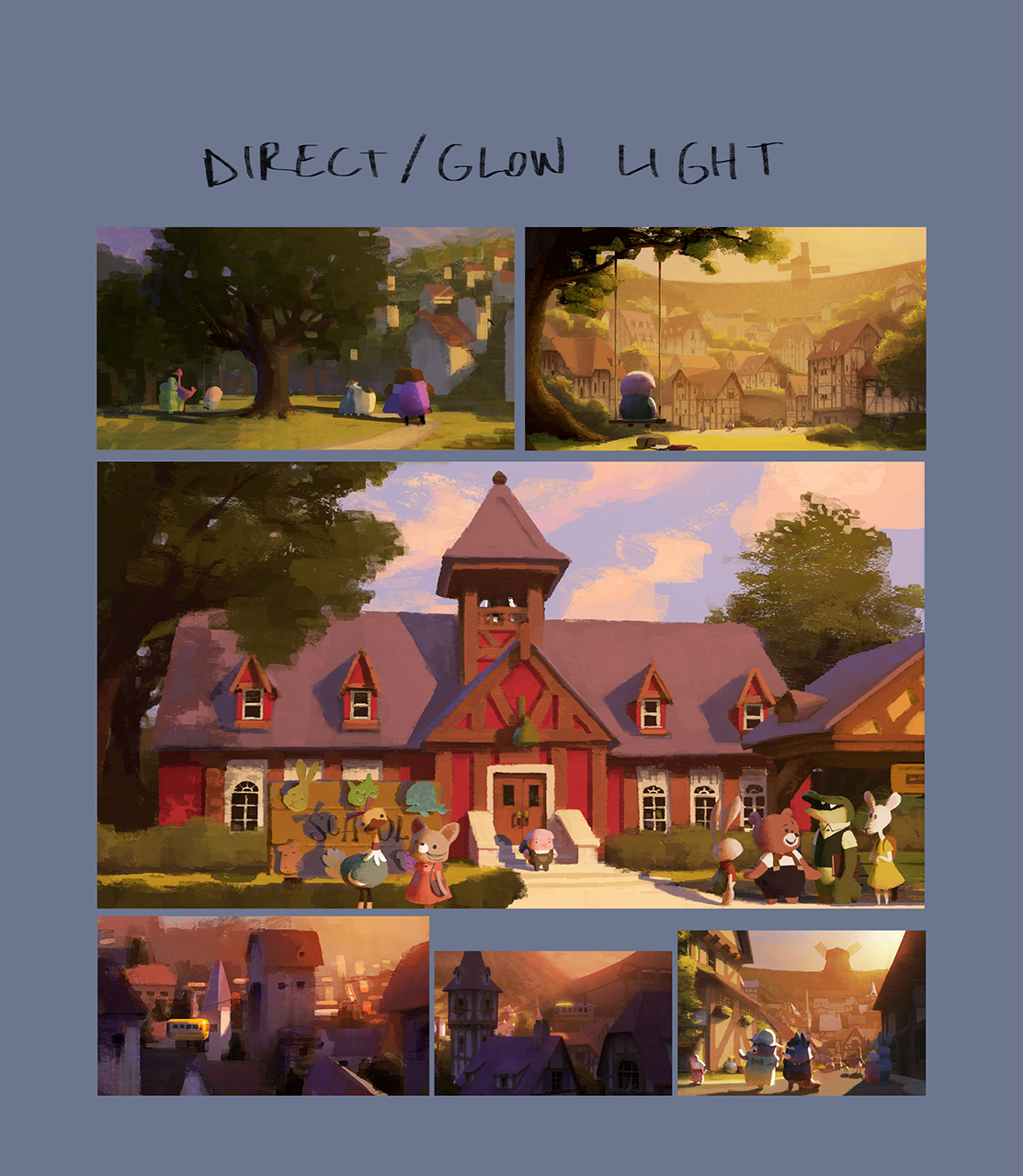 Hope you´ve enjoyed it. Have fun and I hope to see you around here. I´ll come back soon with some professional and personal material. Right now I´m working on a new children illustrated album and I can´t wait to share some of that with you so stay tuned. Bye bye 🙂

Back from holidays 2017
Painting with light & color with Robert Kondo & Dice Tsutsumi: Week 8.