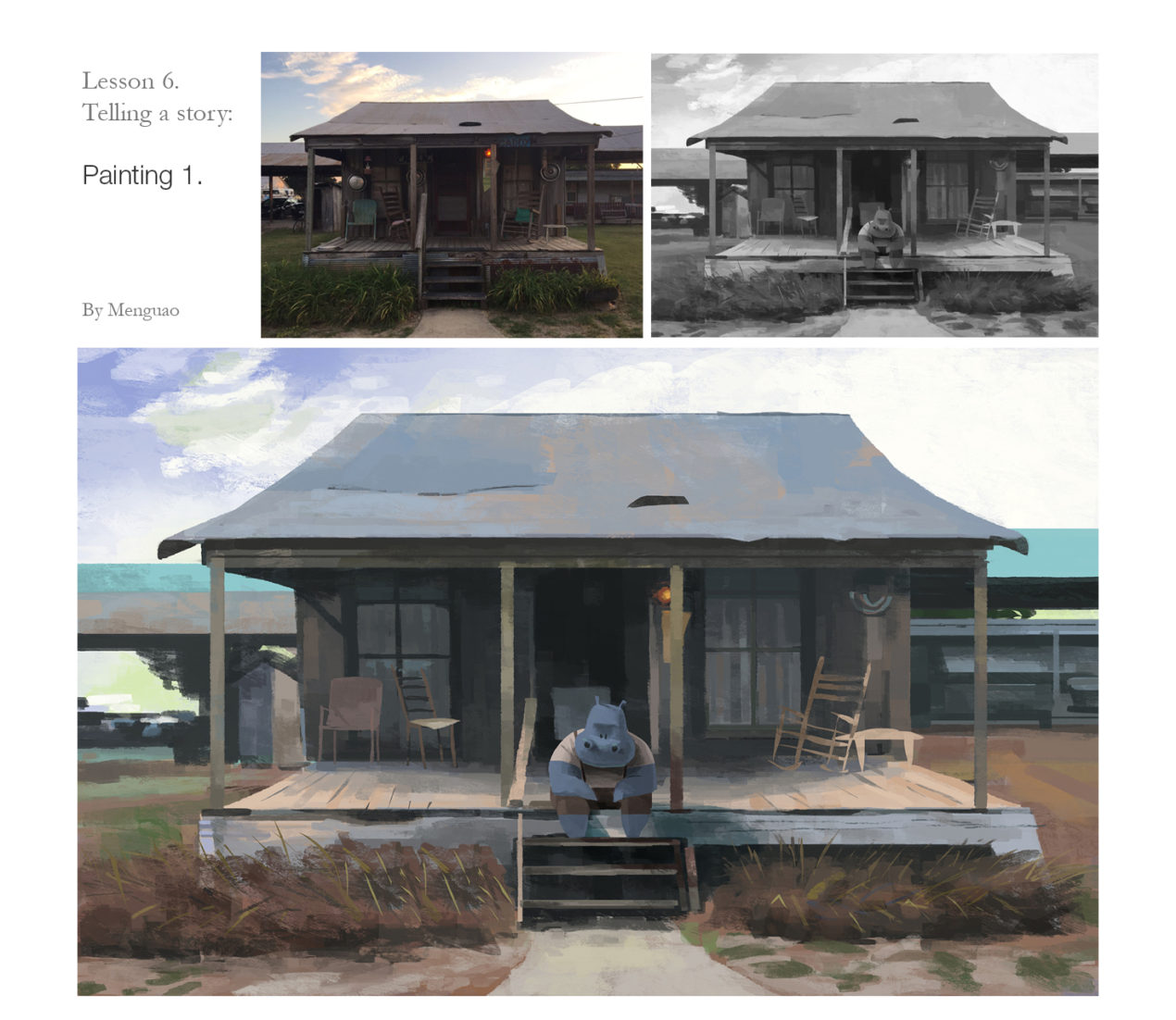 This week was about using lighting in order to tell a story or create a mood for a scene. We had to choose 3 different still life enviroments and paint them in color, then choose one and convey a story using only values. We were asked to do it in a neutral difused light, black and white, then paint 3 different lighting situations to change the feeling of the story. I got it wrong 🙁 so I painted 3 different scenes, then did the black/white thing and at last I painted 3 different lighting situations for each one of them.

Anyway, despite of the fact that I didn´t understand exactly what the teachers were asking (and this is a very important thing when illustrating profesionally, careful!), I got the main point and I worked more than I was sopposed to. And at the end it worth it.

I decided to paint from photo reference (taken by myself or friends) to have more freedom in choosing the enviroments. I also decided to use Tonko House characters to «humanize» the scenes (the truth is a wanted to use those characters so bad… ;). Finally we had to use photo reference for each painting and this was much harder than I expected. It took me like forever but helped me focus on what I wanted to transmit. 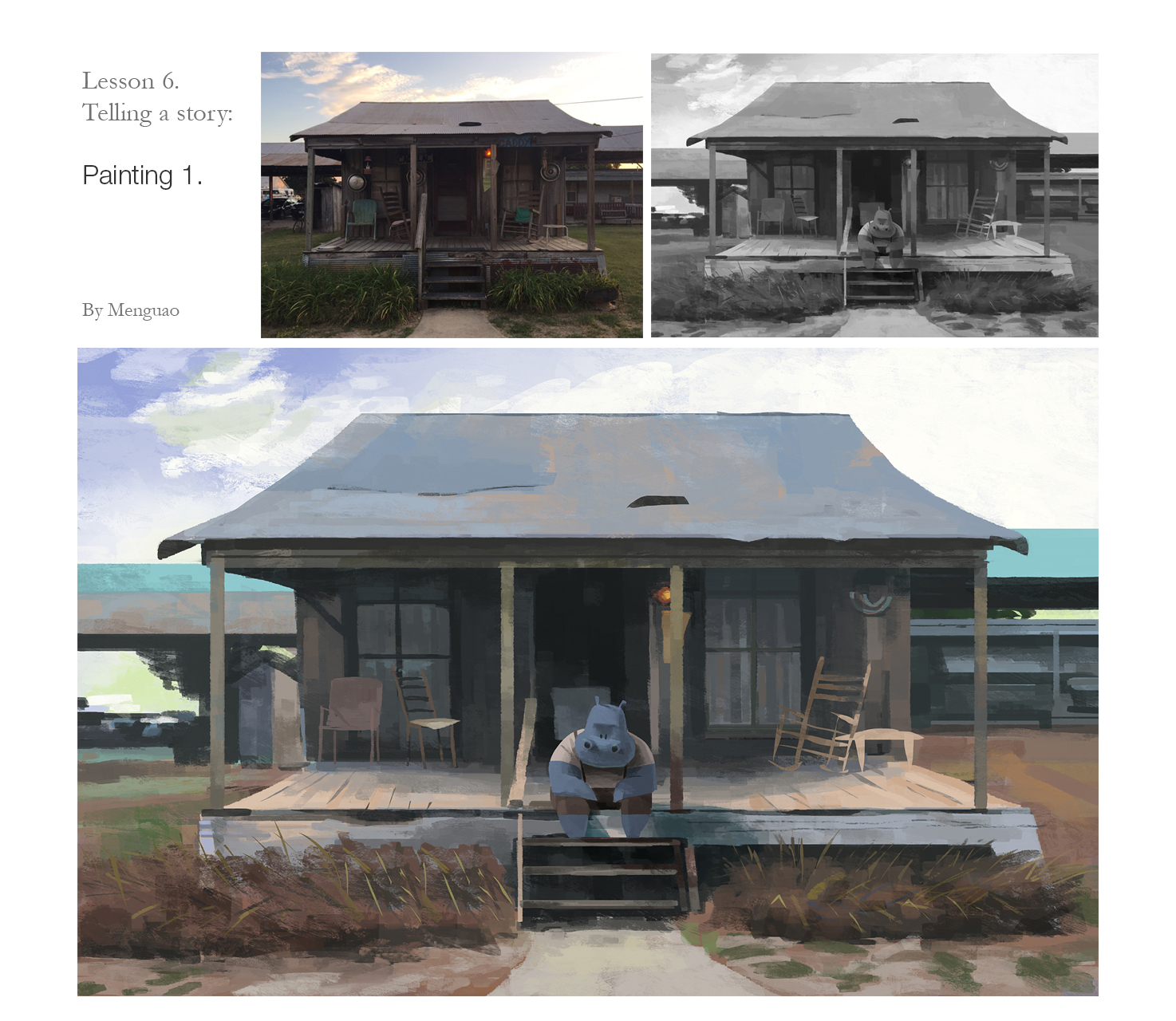 The bully. The house itself had a personality and fitted so well with the character. You can imagine a though domestic situation happening inside this place. I wanted to have a more intimate look towards the characters. This photo was taken somewhere in New Orleans (USA). 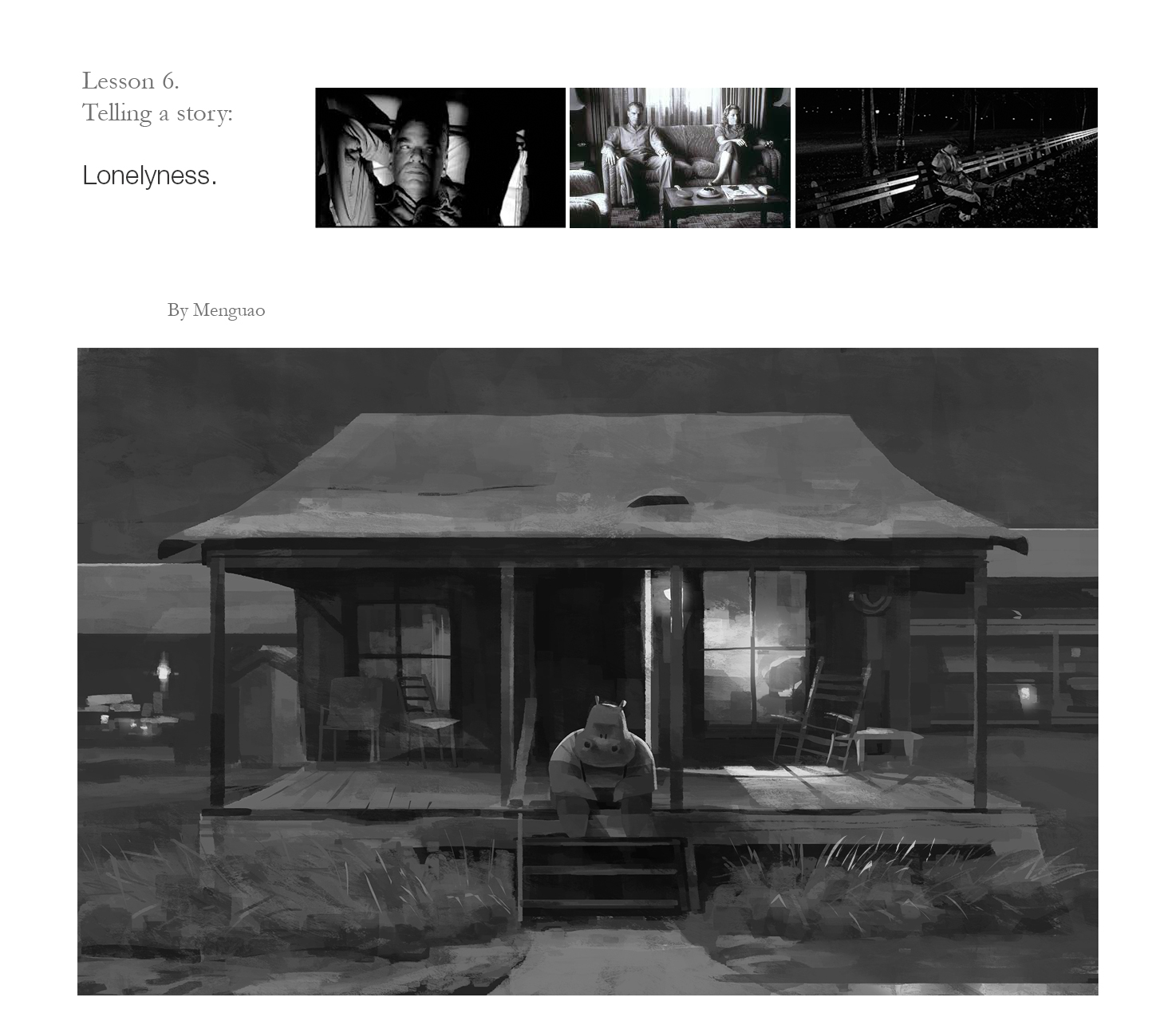 It´s dark outside and someone is in the house watching tv, unaware of the hippo and his feelings. I thought of this scene as a kind of calmed violence. 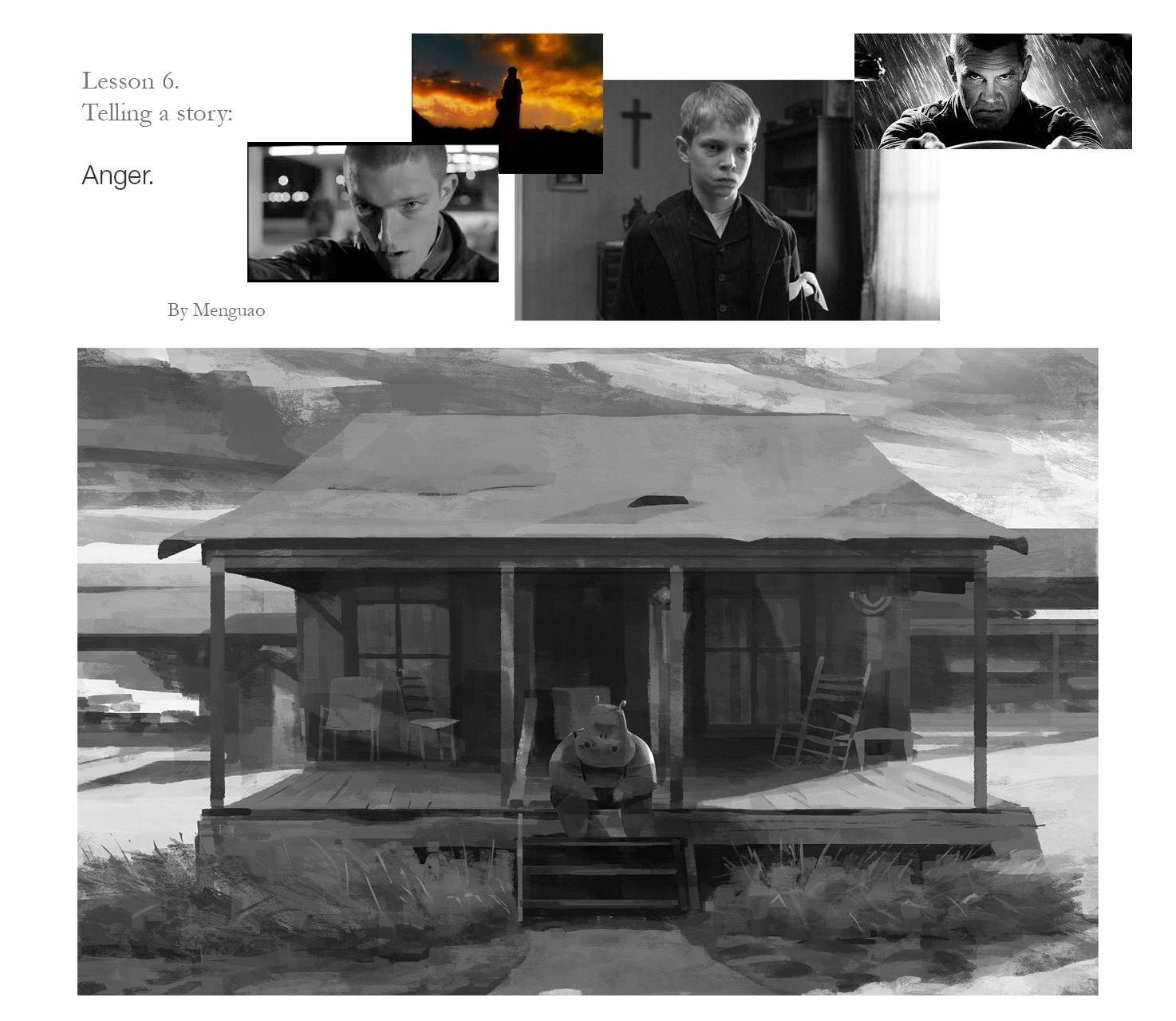 The dramatic sky as a metaphore for inner anger/rage of the hippo just like in the frame from «Gone with the wind». Hard direct light touching the character just a little. 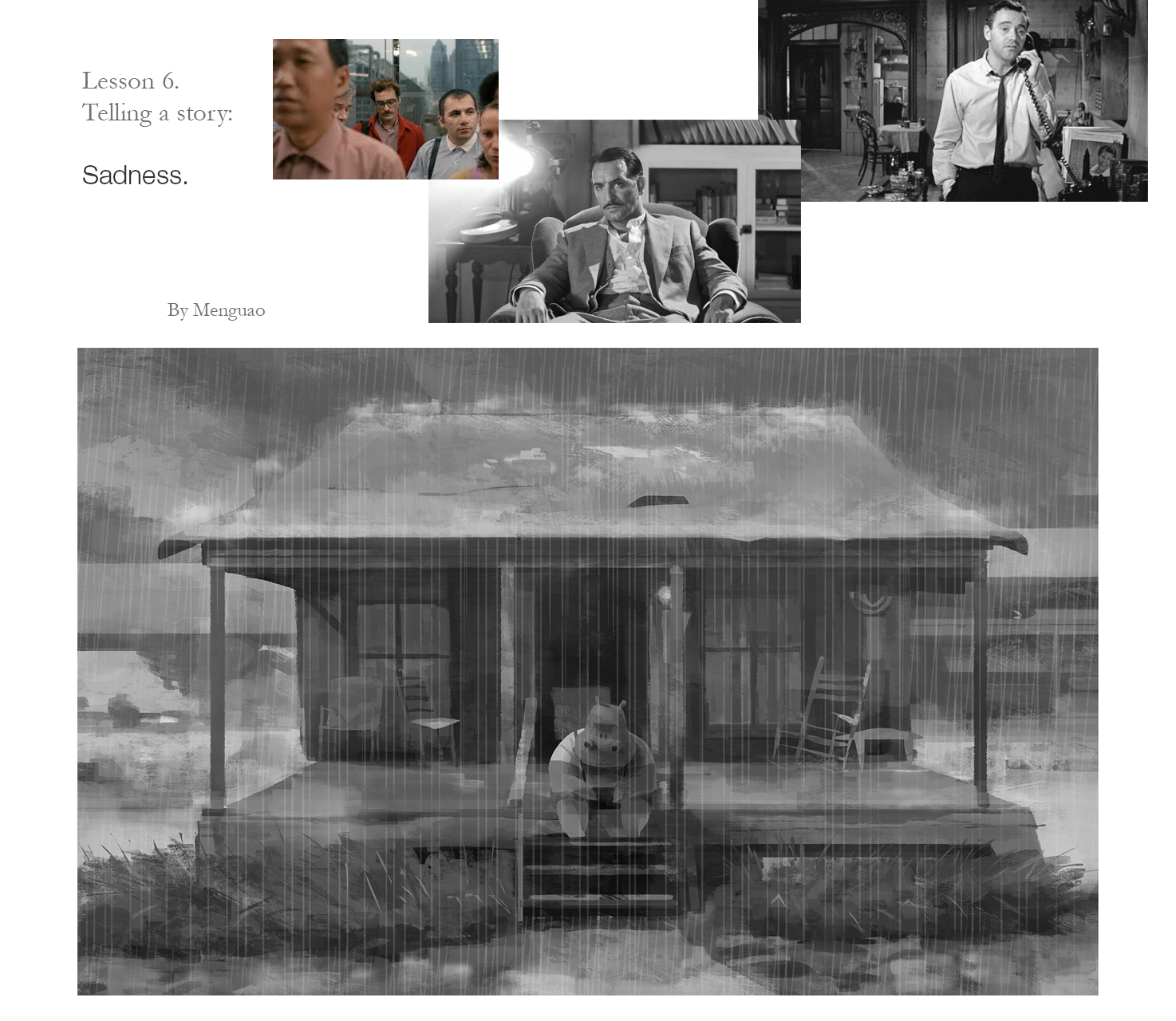 The classic: rain for sadness. Maybe he is regretting something he did or just feeling sad for himself. Lonelyness is also implicit because of the enviroment itself. Very grey scene. 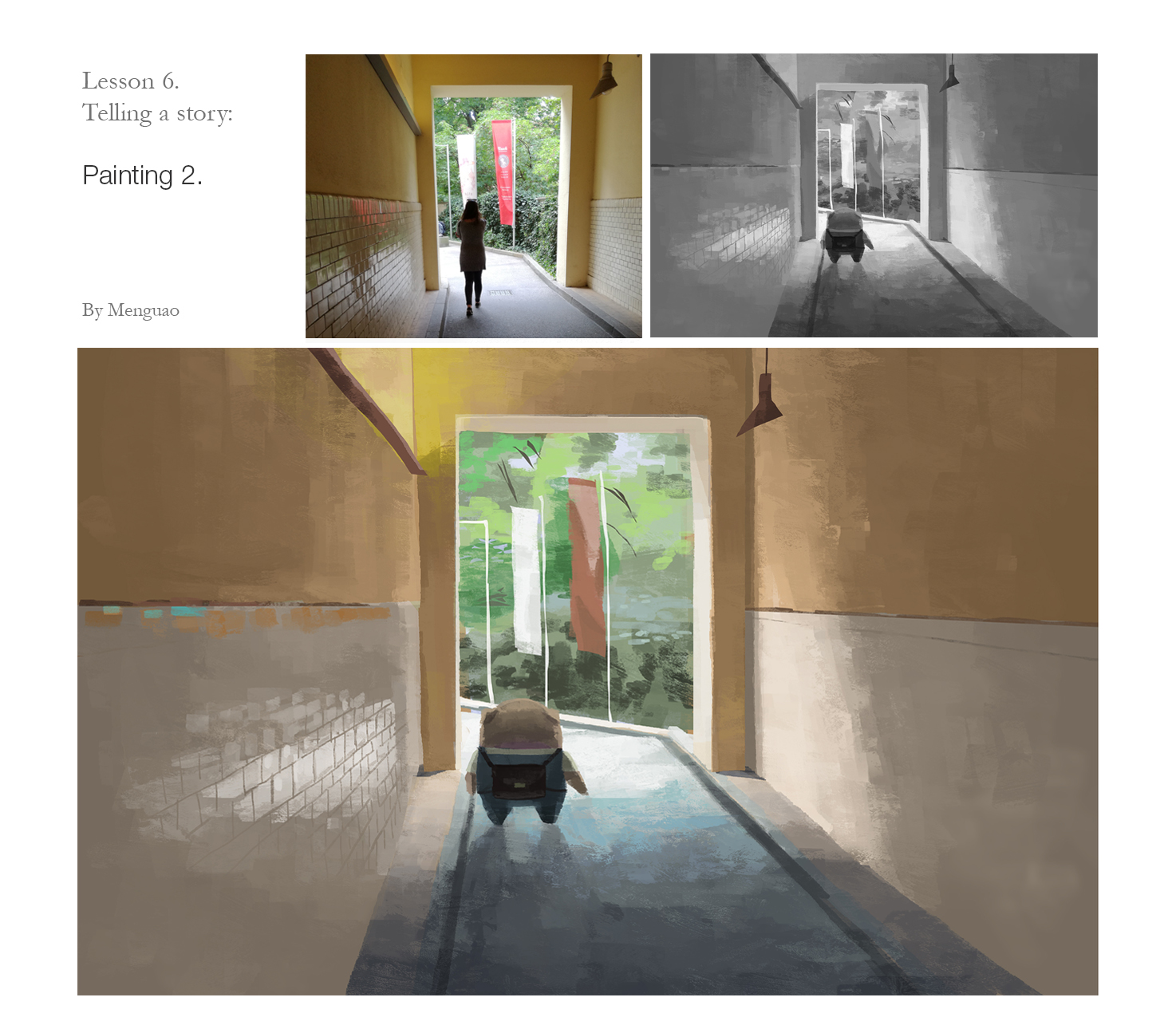 The bullied. A tunnel is a very helpful resource and I thought it could be a good enviroment to play with the representation of different stages of fear. Photo taken in Berlin (Germany). 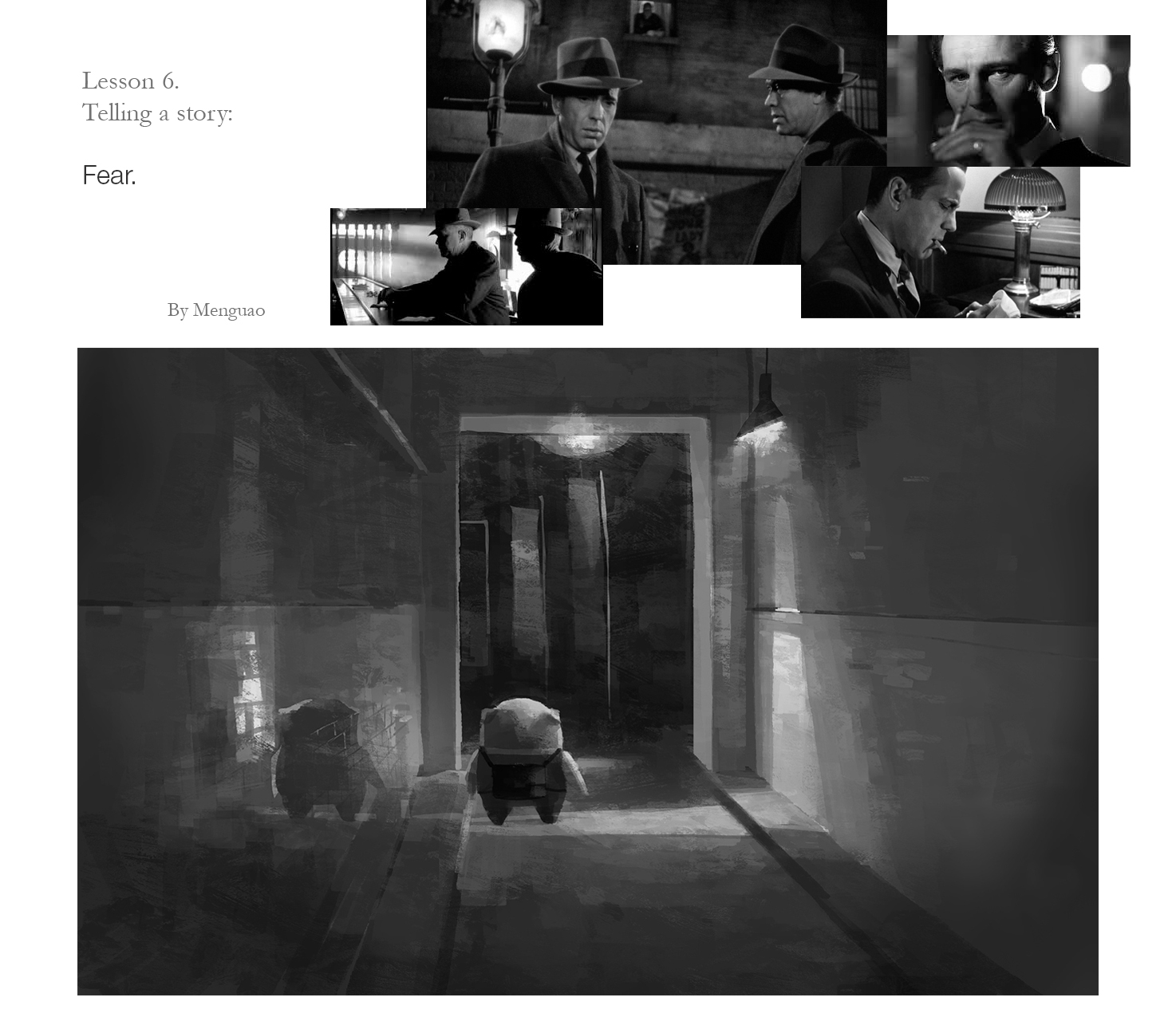 The dark tunnel. Is creepy inside but the outside is not too much better. The character remains frozen under the uncomfortable light, like in an island sorrounded by darkness. Reflection on the wall makes the hole scene look even stranger, like there´s two characters. 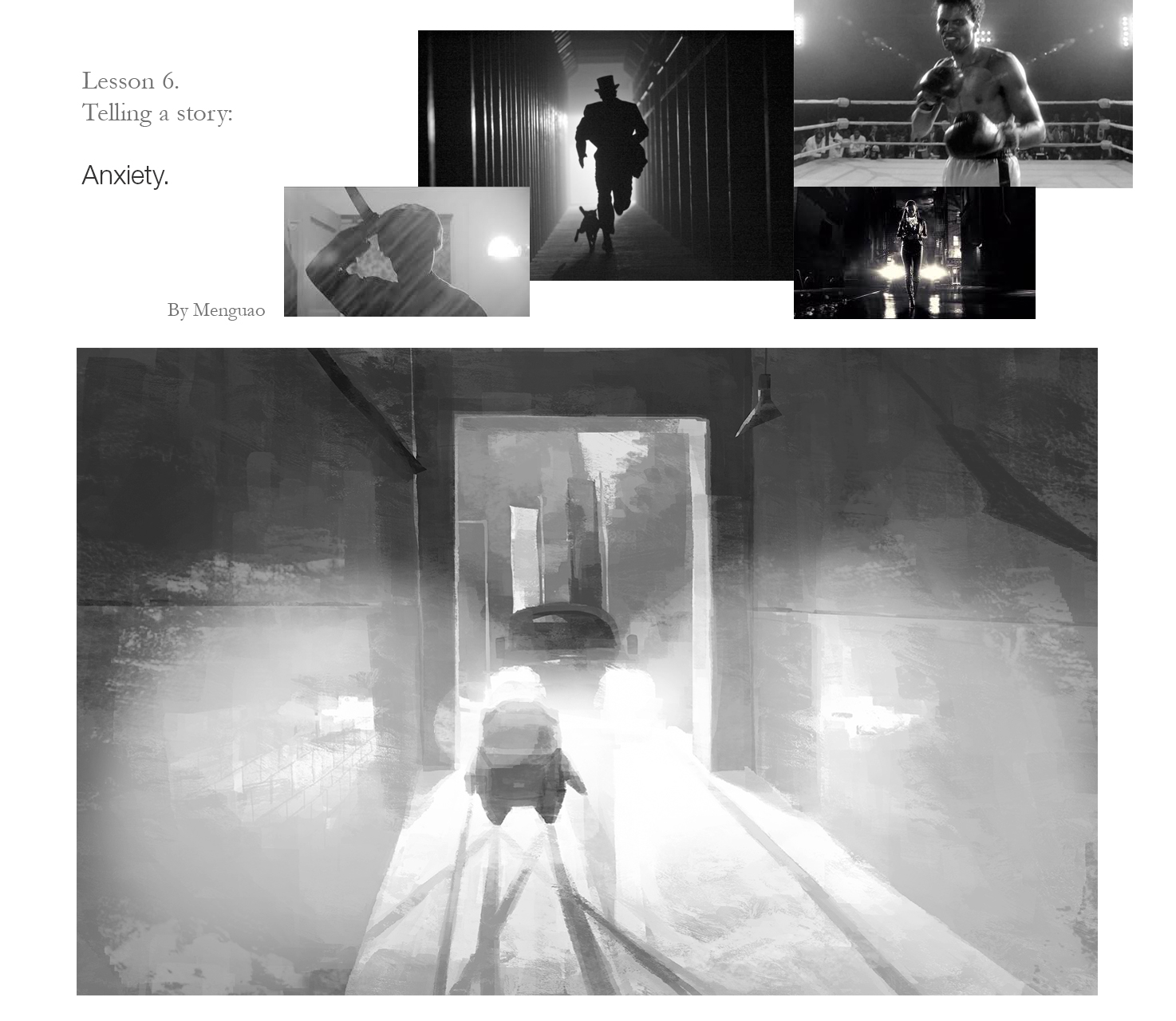 When the reason why you´re scared just faces you (and you have no scape). In this case the anxiety is caused by an external element: the car, so this one is not so much of an intimate look inside the character. Maybe I could have thought of a different idea to keep the work on that line, but nothing else came to my mind at the time and I still had a lot of work to do. Still I think this represents the idea pretty well. Do you now that feeling when you´re so scared, your heart is beating so hard, and you feel like you are about to faint? Everything starts to turn white like you´re getting blind. Car was not so much of a bad external element after all. 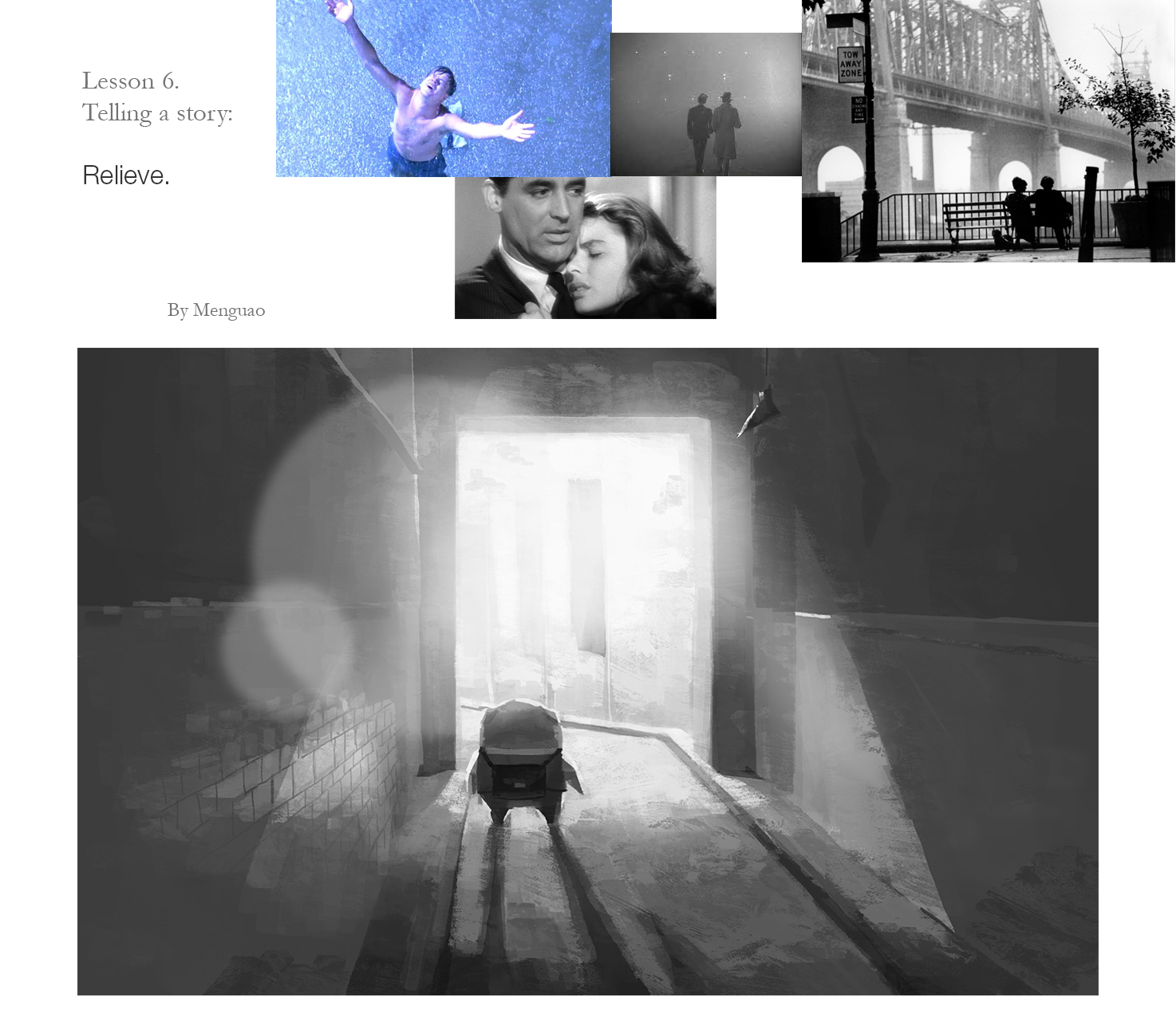 The light at the end of the tunnel. Poor pig, he happened to have such a bad time in the previous scenes, that I just wanted him to have the chance of feeling relieved. 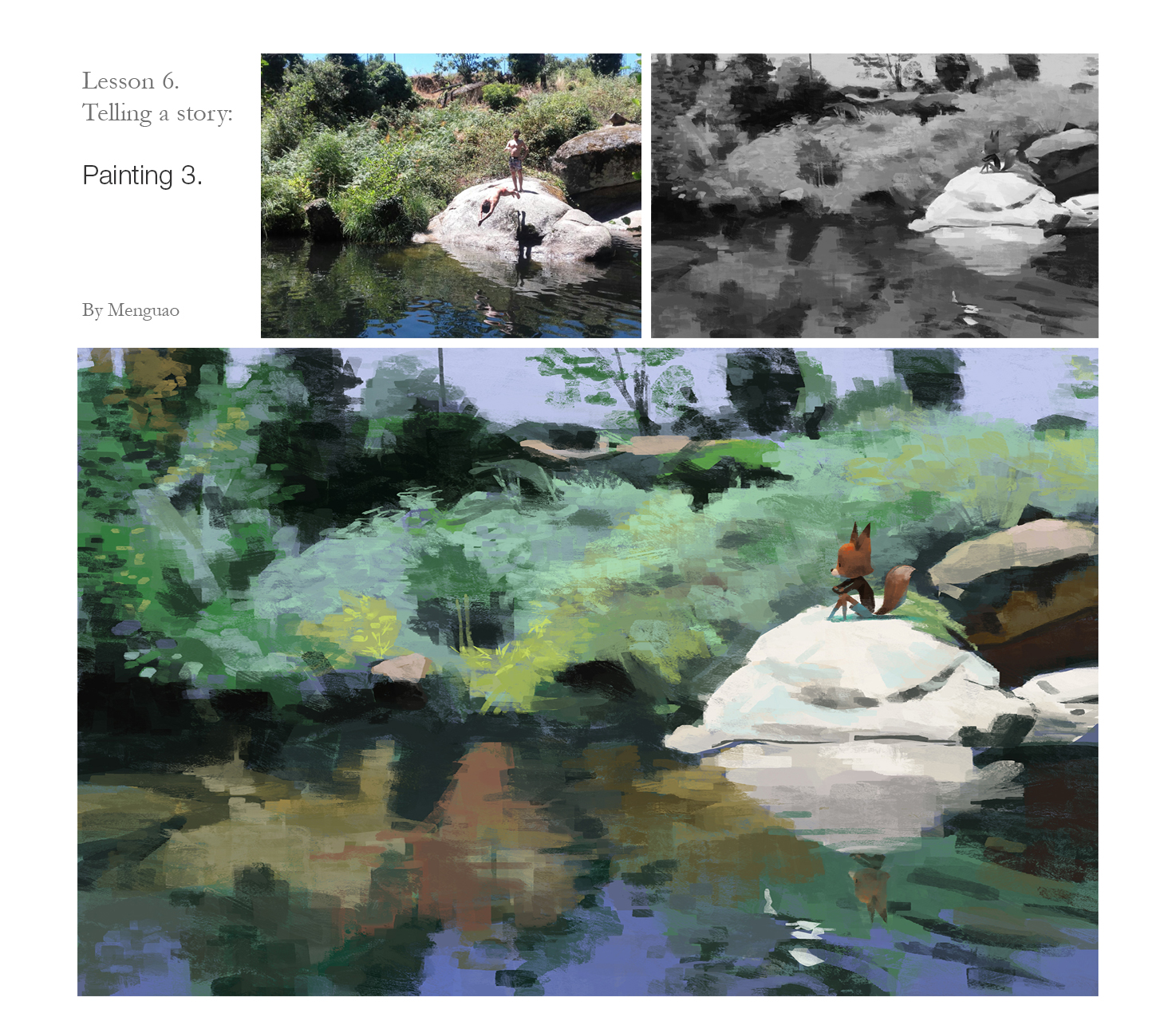 The thoughtful guy. I don´t know if this fits the character of the fox at all, but still I decided to have this scene my way. I wanted to practice the difference between human and natural enviroment. This photo was taken somewhere near Candeleda (Spain). 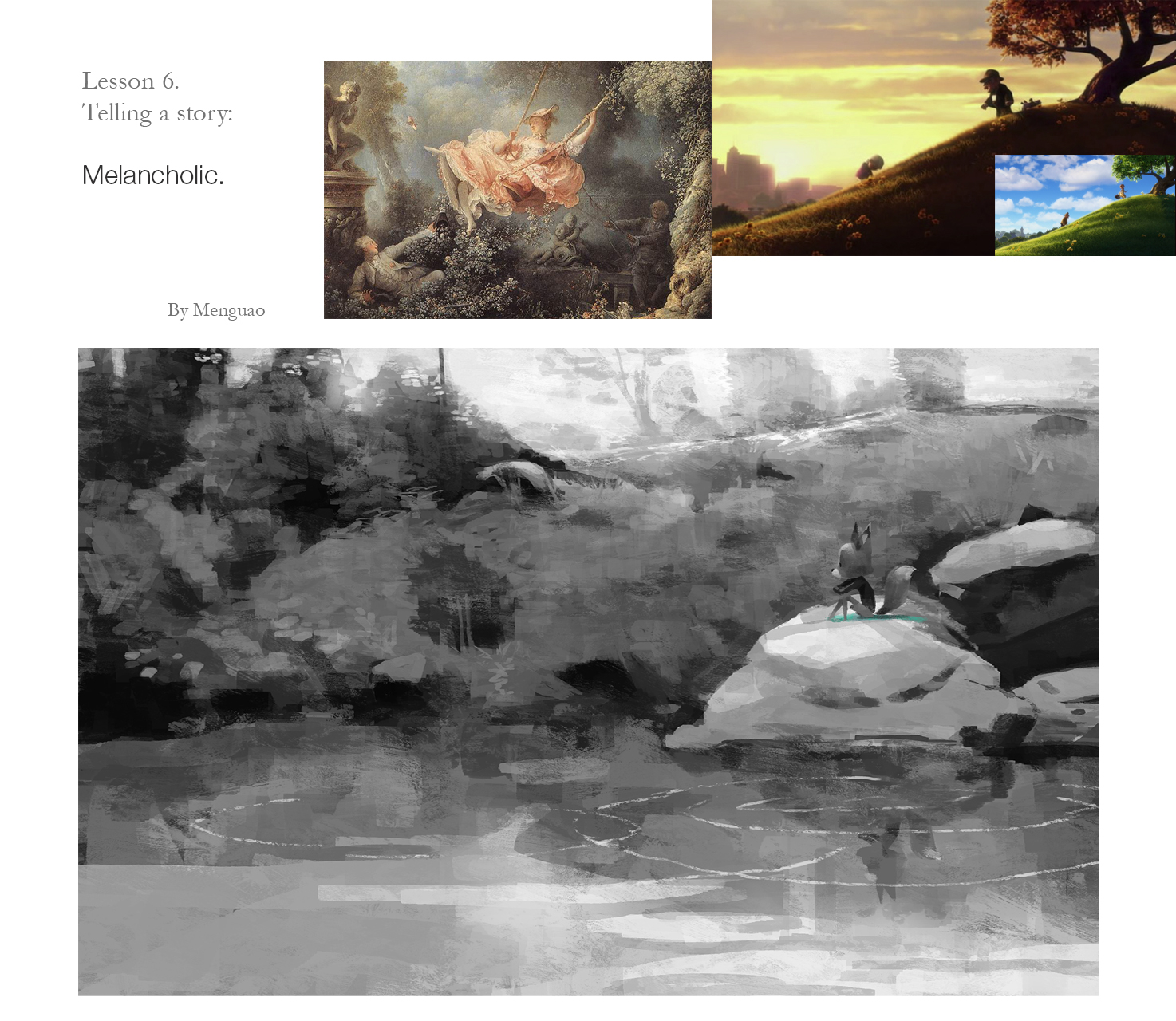 The romantic painting was my main source for inspiration. I remember I had this painting in my mind even before go looking for it. It´s kind of cheese, right? jajajaja… I struggled a lot trying to avoid that look but I ended up liking it. The waters are unquiet as the soul of the fox is jajajajajaja… Left-down corner of the image looks too much unfished (I´m realizing right now). 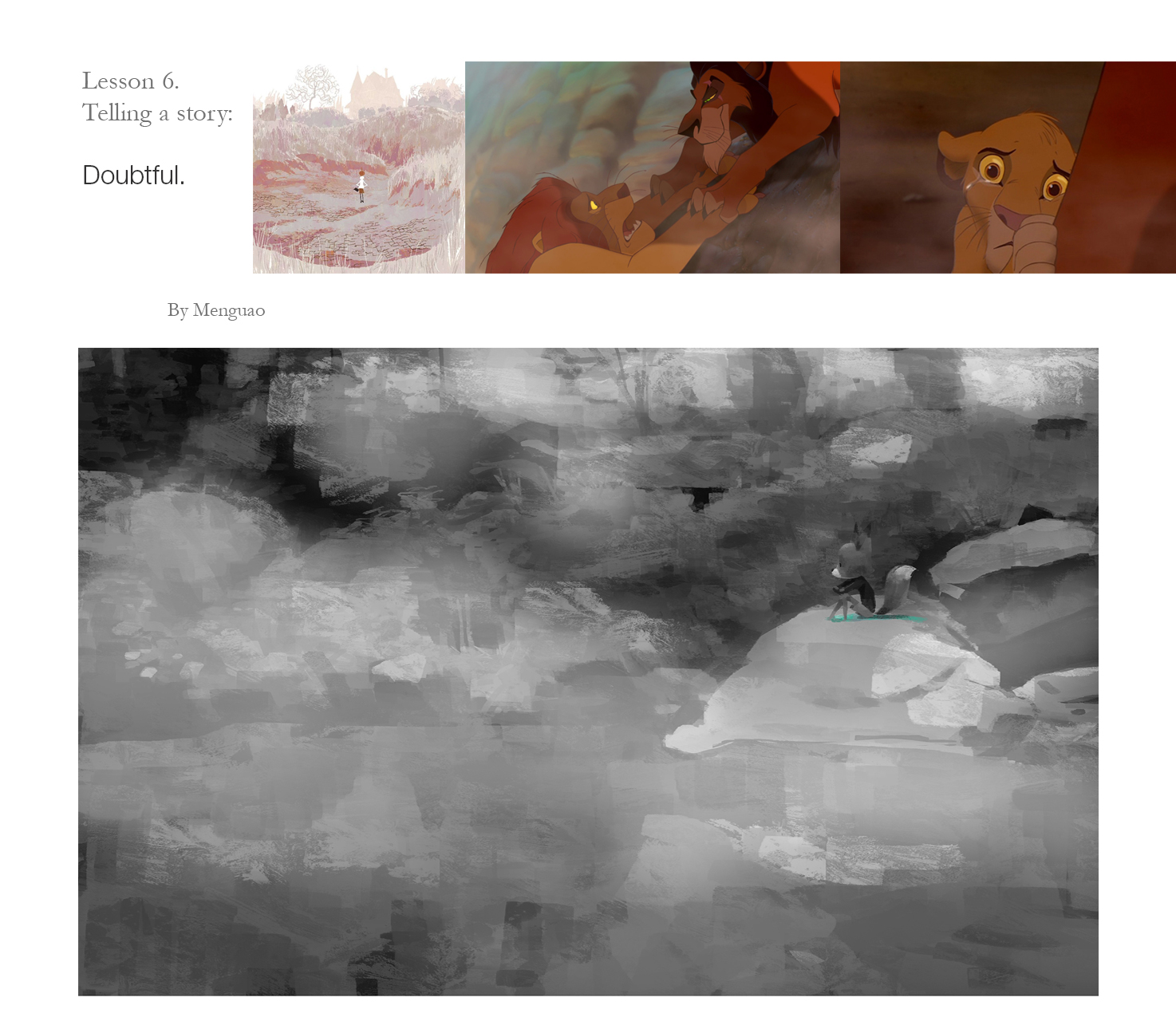 The foggy one. I think I was runnig out of ideas at this point, ´cause this one is pretty lame and not so well executed too… fuck. jajajajjajajaja… 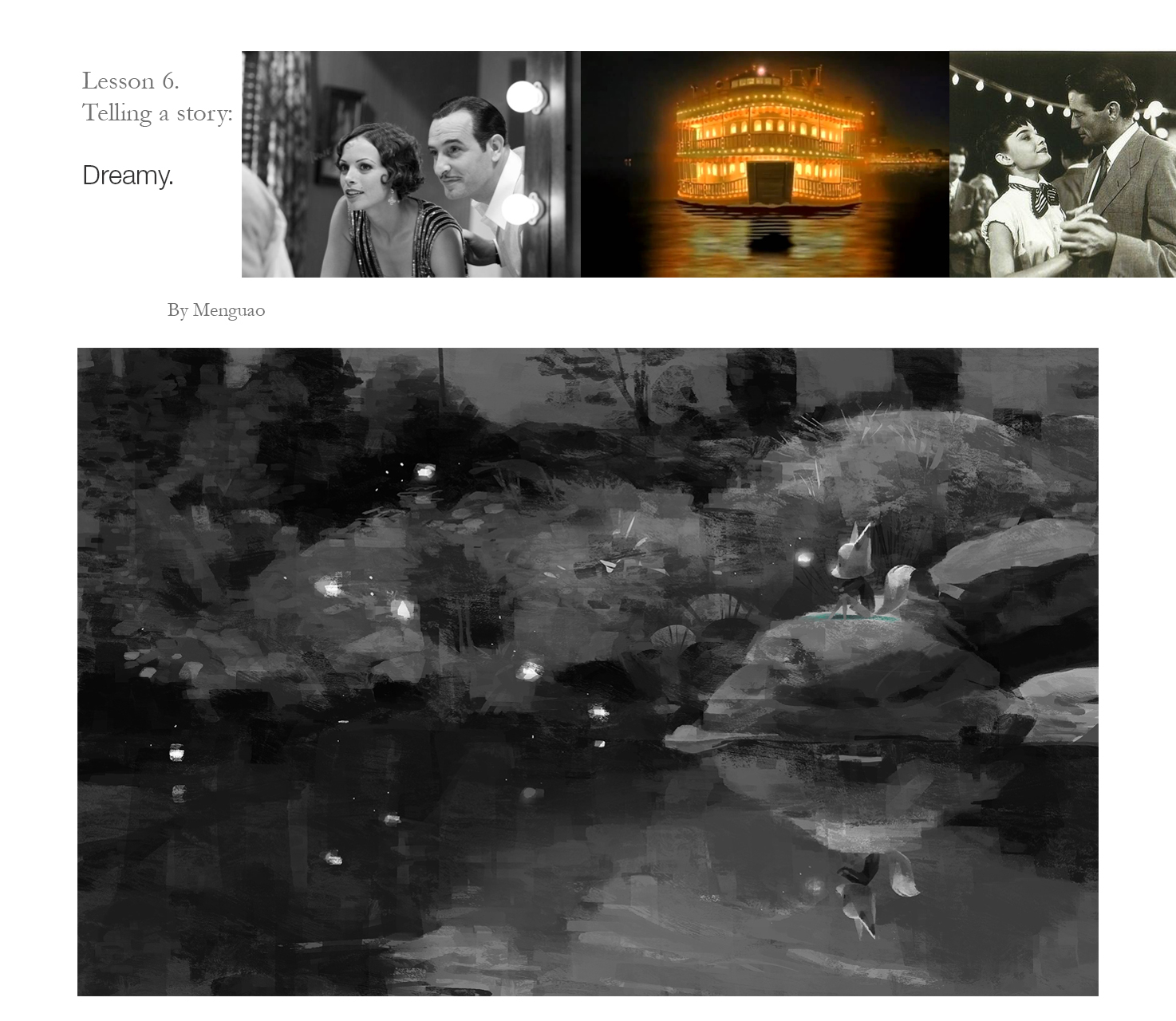 And what do you think about this one with the fireflies? Night scenes are always interesting to paint for me ´cause I don´t have so much practice in doing them. I could have avoided the fireflies but the truth is they help represent the idea soooo… In my references: bulbs = fireflies.

See you next week.